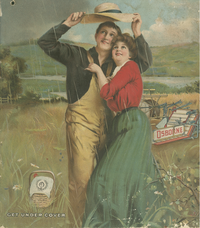 If a complete history of American manufacturers is ever to be compiled, American trade catalogs will unquestionably be one of the most valuable sources of material available. --Lawrence B. Romaine in A Guide to American Trade Catalogs, 1774-1900.

The Department of Special Collections at the University of California, Santa Barbara, has one of the largest number of trade catalogs in the United States. Most belong to the Lawrence B. Romaine Trade Catalog Collection (RTCC). The RTCC contains more than 50,000 items, primarily 19th and early 20th century American trade and advertising literature. The Romaine Collection contains two major series: Subject Files and The Weathercock House Archive. The Subject Files make up the largest part of the collection, with more than 41,000 trade catalogs that Romaine collected and which are also mostly arranged along the lines of Romaine's Guide.

Items can be found via subject or name of company using the online guide to RTCC. Subjects are arranged alphabetically; with box numbers beginning anew for each subject/category. Within each subject, the items have been arranged alphabetically by manufacturer. Sometimes materials from a given company are found in more than one box, and in other cases apparently dissimilar materials may be located within a given box. Recently acquired trade catalogs have been cataloged individually. Over 1000 can now be searched via UC Library Search or WorldCat.

It should be noted that the catalogs found in specific collections are those that Romaine collected, not those listed in his guide. The latter are housed in nearly 200 separate institutions across the United States.

The Romaine Trade Catalog Collection is named after Lawrence B. Romaine (1900-1967), an antiquarian dealer who bought and sold rare books, manuscripts, trade catalogs, and other Americana. During his time, Romaine was recognized as the leading expert in the U.S. on trade catalogs, and was the author of A Guide to American Trade Catalogs, 1774-1900 (New York: R. R. Bowker Company, 1960), the standard reference work in this field.

In 1923, Romaine began to establish himself as an antique book dealer in Middleboro, Massachusetts. This is where he began his antique business called "Weathercock House." In a span of approximately 30 years, Romaine was able to collect over 41,000 trade catalogs from the 19th and early 20th centuries. A few of those subjects included: agricultural implements, clothes, medical and surgical instruments, weathervanes and windmills. The bulk of his collection focused on machines, tools, engines and other hardware used in agriculture and manufacturing industries.

UC Santa Barbara Library has contributed thousands of images to Adam Matthew's digital collection Trade Catalogues and the American Home. "Explore domestic consumerism, life and leisure in America between 1850-1950 with Trade Catalogues and the American Home. This resource presents a wealth of highly illustrated primary source documents that highlight commercial tastes and consumer trends, and provide a valuable visual record for a breadth of interdisciplinary study." Note: not all catalogs in our trade catalog collections were digitized - please request reproduction requests via your Special Collections Research Account.

Subjects in RTCC include: