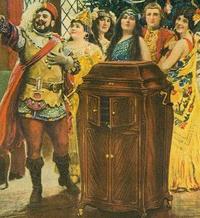 The Discography of American Historical Recordings (DAHR), is a database of over 280,000 master recordings made by American record companies during the 78rpm era. It includes audio streaming of more than 30,000 recordings, available free-of-charge. The DAHR is part of the American Discography Project (ADP)—an initiative of the University of California, Santa Barbara and the Packard Humanities Institute that is edited by a team of researchers based at the UC Santa Barbara Library. The work is an expansion of the Encyclopedic Discography of Victor Recordings (EDVR) database.

Documentation of the activities of the Victor Talking Machine Company and RCA Victor in the DAHR derives primarily from consultation of publications of the companies and original documents held in the archives of Sony Music Entertainment in New York City. The DAHR entries describing recordings made by other companies are based upon existing print works, online documentation, contributions from collectors, and examination of discs held by the University of California Santa Barbara library.

DAHR currently includes information on over 280,000 master recordings (matrixes) made by the following companies:

The ADP is also a partner with the Library of Congress National Jukebox project and provides most of the cataloging data used in the Jukebox. As a result of this partnership, 10,000 recordings made by Victor between 1900 and 1925 can be streamed online, as well as more than 20,000 other masters digitized by the University of California Santa Barbara.​