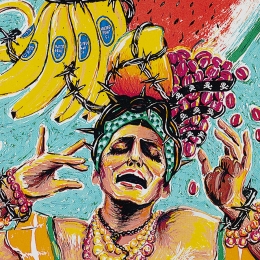 In the silkscreen print “Rio Por No Llorar” (“I Laugh to Keep from Crying”), Carmen Miranda’s famous fruit-laden headdress demands that you look more closely. Bananas with a Chiquita label are encased in barbed wire. A bunch of grapes is surrounded by skulls and crossbones — a pesticide warning. Above them, a Folger’s coffee can bursts open, and flies hover everywhere.

The rest of the print has a similarly ominous feel: the singer is weighed down by barbed-wire chains around her wrist and a heavy, fetter-like crucifix.

“You can see the transgressive element that permeates this whole work,” says Salvador Güereña, curator of Special Research Collections at the UC Santa Barbara Library. “It delivers out a message that multinational corporations are causing suffering in the third world.”

This haunting image is the face, so to speak, of Special Research Collections’ new exhibition, “Nuestras Américas: An Exploration of Expressive Cultures in Latina and Latino America.” The exhibition examines the ways in which Latinos and Latinas in both Latin and North America created senses of identity and belonging through artistic expression. Included are works of visual art, music, photographs, videos and musical instruments.

“At a time when millions of people around the world find themselves displaced and dispossessed, the history of creative place-making within and across the hemisphere takes on special significance,” said George Lipsitz, a professor of Black studies and of sociology, who was part of the curatorial team. “In times of trouble, it may be that a painting, a poster, a dance step or a song are the most accessible ways of telling a story, creating a community, celebrating survival or envisioning and enacting a more decent and dignified existence.”

The exhibition ranges widely in both time and style. Music includes both the first samba recording, taken in 1916, as well as a range of 1980s Latino punk rock. And the displays incorporate everything from high art — the ink drawing “Libertad,” by the artist Esther Hernandez, for example, which shows Maya glyphs being carved out of the Statue of Liberty — to mid-20th-century photographs of elaborately painted lowrider cars. Güereña describes these as “moving sculptures” created by young people of Latino descent.

The idea for “Nuestras Americas” was born when the library acquired a variety of new Latino American materials. Among them were silkscreen posters from the Mission Gráfica and La Raza Graphics collections; a collection of Chicano punk rock with accompanying photos of the East L.A. punk scene; and an array of videos, sound recordings and other materials from the Troy Café, a famous L.A. venue for Latino performers.

“We were trying to make sense of all of these diverse things that we’re bringing together,” said curator Ryan Lynch, a UC Santa Barbara subject librarian in Latin American studies. Finally, they realized something: “Whether it’s artistic or visual or dance, all of these works are expressing something about their cultures.”

Excerpted from an article by Talya Myers which appears in full in UCSB's The Current.