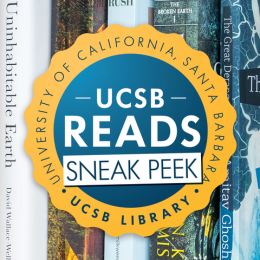 This summer, read along with the UCSB Reads Committee as they work to select the UCSB Reads 2020 book.
The UCSB Reads Committee has announced the five titles that make up the short list for 2020 consideration. The selections are (in no particular order):
1. "The Fifth Season" by N.K. Jemisin
2. "The Overstory: A Novel" by Richard Powers
3. "Rising: Dispatches from the New American Shore" by Elizabeth Rush
4. "The Great Derangement: Climate Change and the Unthinkable" by Amitav Ghosh
5. "Uninhabitable Earth: Life after Warming" by David Wallace-Wells
Give them a read and let us know what you think! Submit feedback on Facebook by mentioning @UCSantaBarbaraLibrary and using #UCSBReadsSP. Then stay tuned as we announce the UCSB Reads 2020 selection this fall.   For a short summary of the five titles, listen to a KCSB interview with librarian Alex Regan.
UCSB Reads is an award-winning campus-wide and community-wide “one book” program led by the UCSB Library since 2007.
Posted on: 07/23/2019 - 10:24
Topics: UCSB Reads