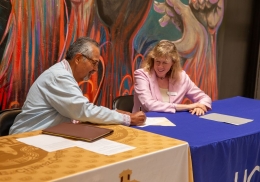 The UC Santa Barbara Library and La Casa de la Raza have reached a new accord that signals another milestone in the preservation of local community history.

At a public reception July 11 at La Casa de la Raza, representatives from the library and from La Casa signed an agreement that will ensure the historical records of this community-based organization will be archived, preserved and made accessible in the library’s Special Research Collections.

Michael Gonzalez, president of La Casa’s board of directors, officiated the ceremony with University Librarian Kristin Antelman signing the agreement on behalf of the UC Santa Barbara Library. La Casa presented Antelman with a vintage 1981 poster that celebrated the organization’s 10th anniversary.

“We take our stewardship role over this collection very seriously,” Antelman said. “We will ensure that these archives will be cared for in a way that will preserve the collective memory of La Casa and will show the many positive contributions that La Casa has brought to our local community as well as to our campus.”

Added Sal Güereña, UC Santa Barbara Library archivist who will oversee the transfer of the collection, “These are very significant archives that represent close to 50 years of the work of La Casa de la Raza in Santa Barbara.” The collection, which amounts to 300 linear feet and contains many historical artifacts, posters, photographs, organizational documents and ephemera, will be heavily used, he noted.

“We are so pleased to collaborate with the UC Santa Barbara Library, allowing us to preserve

our stories, documents, our history, all so worthy of memorialization,” said Raquel Lopez, La Casa’s executive director. “Today we secure a process of remembering how local people and communities in Santa Barbara have contributed to our shared culture, preserving and extending the stories of a building that has been home to historic, transformational and life affirming events.”

Following the signing ceremony, children from La Casa’s Summer Art and Music Camp performed a song under the direction of Sandra Limón.

Originally published in UCSB's The Current.