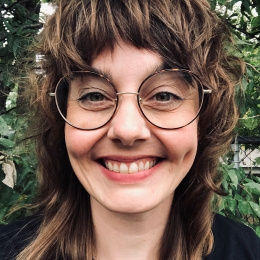 Laura Treat joined the UCSB Library in October in a new dual role as the Curator of Moving Image Collections and Librarian for Film & Media Studies.

Treat says she has always been an avid movie watcher, but having majored in psychology as an undergrad, she didn’t consider film and media or libraries as a career option until she started volunteering at film festivals. In particular, she was inspired by a talk with film historians at the San Francisco Silent Film Festival in which they discussed the preservation of films being shown during the festival. This led her to seek out a volunteer position at a local film archive in San Francisco.

“That’s where I developed a lot of the interests I have today with respect to films created outside of the Hollywood studio system,” says Treat. “There’s a whole movement that recognizes and celebrates this type of media, but when I started looking I found there was a lack of home movies and amateur films being used in research and instruction.”

With a desire to create more opportunities for access and engagement around these types of materials, she started working on her Master of Science in Information Studies degree at the University of Texas at Austin and began preserving and providing access to home movies, amateur films, and local television collections through her work at the Texas Archive of the Moving Image. After graduating, she further focused her efforts on preserving local broadcast television and other local film production within the state of Texas while working at the University of North Texas Libraries and then Austin PBS.

She looked to UCSB for employment because of the Library’s esteemed reputation in preserving and digitizing historic performing arts materials as well as the opportunity to work closely with the Film & Media Studies faculty who are enthusiastic about working with special research collections and incorporating primary source materials into their instruction.

UCSB Library’s Special Research Collections (SRC) holds large quantities of film and videotape in its collections that can be made accessible and Treat says she is very interested in helping students and faculty use the materials. Moving image collections require digitization before they can be made accessible for these uses. “When items are requested for use in student research and instruction, that’s one of the ways I can prioritize them [for digitization],” she says, which is why she hopes to increase awareness and use of the materials.

“I’m not just concerned about the physical preservation of moving image collections, but also about why we’re doing it - for people to use and to incorporate into research,” says Treat.

One collection she is particularly excited about is the KEYT-Channel 3 Television News Archive that is jointly housed in SRC (the videotapes) as well as the Film and Media Studies Department archive (the 16 mm film). The collection includes raw local broadcast news footage spanning from the 1960s to the 1990s. These types of television collections are unique and provide rare insight into the history of Santa Barbara.

So far, the collection has been used in classroom instruction in the Film & Media Studies Department and in a documentary production, but Treat says there is still much more work to be done to make it accessible and to achieve her goal of having the collection widely available and used by students, faculty, and the university community.

“Knowing Santa Barbara’s position in the film and media industry, I know it’s going to be a treasure trove of interesting material and will provide a unique local perspective on national and international events.”

Because Treat started her role during the pandemic, she hasn’t been able to interact with the physical materials yet. Instead, she’s been using this time to do strategic planning and evaluate systems and processes as well as get to know the UCSB faculty working in this area. She has recently moved back to California and looks forward to getting more familiar with the campus and the collections.