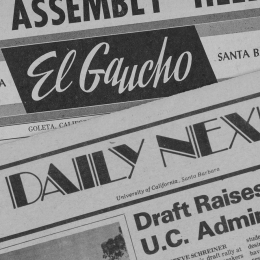 Front-page news at UCSB is no longer confined to a printed page you have to hold in your hand.

Now, anyone can go online to read issues of the university’s student newspaper, the Daily Nexus, along with the other UCSB student-produced news publications that preceded it, dating all the way back to 1923 — when, as one issue noted, student fees were $8 per semester.

The UCSB Library has completed a massive project to digitize the Daily Nexus and its predecessors from 1923 to 2001. More than 7,000 issues can be viewed online, comprising about 90,000 pages.

Previously, anyone who wanted to peruse back issues of the newspapers had to visit UCSB Library’s Special Research Collections (SRC) in person.

The digitization project, which began in 2015, was made possible through a gift from John Arnhold, a UCSB alumnus (’75), UCSB Trustee, and former Daily Nexus reporter. The newspapers are part of the Alexandria Digital Research Library (ADRL), UCSB Library’s home for collections of digital materials.

“This project is deeply meaningful to me because I worked at the student newspaper for one year as an undergraduate,” Arnhold said. “I'm grateful that past, current, and future generations of Gauchos, along with scholars and the community, will be able to access the university’s cultural history as captured by the news publication closest to campus.”

The newspapers are a trove of detailed news items about campus life, from everyday social activities — Glee Club concerts, sorority teas and drama club tryouts — to athletic events, to perennial issues that still affect the campus today, such as Isla Vista renters’ rights and student government.

“This archive is a tremendous resource that not only serves as a unique history of UCSB and student life, but also allows students, faculty, and alumni to connect and reconnect with each other and the University,” said Kristin Antelman, University Librarian.

The archives also offer a window into the UCSB community’s reaction to local, national, and global events, from the end of World War II to the Santa Barbara oil spill, the fall of the Berlin Wall and the 1992 Los Angeles riots.

Alumni will likely be interested in searching issues from the years they attended UCSB. Issues of the very earliest student publication, however, called The Eagle, are an entertaining read as well, with stories about the first pay phone (just one) installed on campus, and an editorial chastising students who “tear up the driveway” and “roar their engines” as they drive off campus.

SRC staff then packaged all the issues together for shipping on pallets to a company in Utah that performed the digitization.

The company digitized the items as TIFF files, Rissmeyer said, then used special software to create fully text-searchable PDF files. These digital files were transferred to hard drives that were shipped back to the Library along with the original physical copies. SRC then worked with the Library’s Content Management Systems and Information Technology staff to prepare and check metadata, and transfer the files to the Library’s server and ADRL.

Those who search the archives will see PDFs of the actual newspapers, complete with photos, ads, and evolving sophistication in graphic design, typography (and hairstyles).

The following titles are included in the digitized collection:

Ben Alkaly, a UCSB alumnus who worked as a reporter at the Daily Nexus during the 1990s, mainly writing about sports, said that when he heard about the digitization project, he alerted a Facebook group of former Daily Nexus staff members (they call themselves “Nexites”). “Everybody went crazy looking at it,” he said.

“It was still the print era when I was there, and we had a very primitive website,” said Alkaly, now communications manager at the UCLA Library. Alkaly said that although former Daily Nexus reporters are a natural audience for the archives, the collection has value beyond nostalgia for “geeky journalists.”

Santa Barbara’s main daily news publication, the Santa Barbara News-Press, “hasn’t always captured the pulse of the university as well as student journalists living there in the moment,” he said. “The Daily Nexus has always done that.”