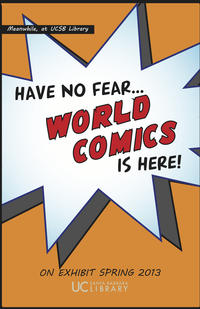 Comics, caricature, graphic narrative, visual storytelling – whatever we wish to call it, it is a medium that has compelled readers around the world, in some cultures for hundreds of years. The comics we in the United States are familiar with today emerged out of a particular historical trajectory, but other societies have simultaneously developed their own comics traditions, resulting in an exciting pollination of cross-cultural influences.
The advent of mass-produced print publishing brought an explosion in popular media: Japanese woodblock-printed books, European broadsides, and other forms of popularly published illustrated narratives could be considered the comics of their time. The development of the newspaper and magazine in 19th century Europe brought with it the rise of political cartoons and satirical caricatures, forms which soon spread to Japan, the Americas, and throughout the world. Called comics in the US and UK, manga in Japan, and bande dessinée in France and Belgium, these art forms began to modernize and cultural icons emerged. These seemingly timeless cultural touch points have extended their fame and popularity across borders and generations.

Comics matured with the baby boomer generation and took on new, experimental forms. Creators pushed the boundaries of what comics could do, branching out into new art styles, new themes and subject matter, and attracting a wider audience. Ever-evolving, mainstream comics adopted and absorbed some of these alternative developments, dramatically deepening and expanding the core of the medium. As comics grew darker and grittier with the political climate of the 1980s, a new generation of graphic narrative was born, concerned with the exercise of power, responses to authority, and experiences of freedom and individuality in a society enthralled with consumerism, state authority, and the suppressed neurosis of the post-modern ego. At the same time, artists began to engage with the politics of self-identity, creating a new genre with family memoirs and personal narratives highlighting previously unheard voices.
Whatever comics means to someone as an individual, it is undeniably the centuries-old, and still unfinished product of an intensely meaningful “dance,” as comics theorist Scott McCloud might say, between two of humanity’s most fundamental forms of communication: words and pictures.
Click on the links below to explore the exhibition.