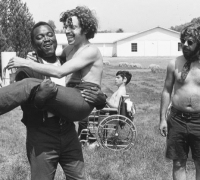 In honor of National Disability Employment Awareness Month and the 30th anniversary of the passage of the Americans with Disabilities Act, the Carsey-Wolf Center and UCSB Library are delighted to host a virtual discussion with the directors of the film, Crip Camp: A Disability Revolution (2020).

In the early 1970s, teenagers with disabilities faced a future shaped by isolation, discrimination and institutionalization. Located in the Catskills, New York, ramshackle Camp Jened exploded those confines. Jened was the teens’ freewheeling utopia, a place where summertime sports, smoking, and make-out sessions awaited everyone; campers experienced liberation and full inclusion as human beings. Their bonds endured as many migrated west to Berkeley, California, a hotbed of activism where friends from Camp Jened realized that disruption, civil disobedience, and political participation could change the future for millions. Crip Camp premiered at the 2020 Sundance Film Festival, where it was the winner of the Audience Award.

Co-directors and producers Jim Lebrecht and Nicole Newnham will join Hannah Garibaldi (Film and Media Studies, UCSB) for a virtual discussion of this fascinating documentary. The film may be viewed in advance on Netflix.

Please also join UCSB Library on Wednesday, October 21 at 2 PM for “Disability Activism at UCSB and Beyond,”a student-led event in honor of National Disability Employment Awareness Month and the 30th anniversary of the passage of the Americans with Disabilities Act.