On Collecting and Hoarding 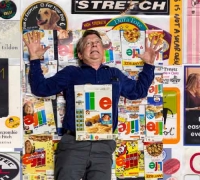 On Collecting and Hoarding

UCSB Library is pleased to co-sponsor two events organized by the Interdisciplinary Humanities Center (IHC) as part of their Critical Mass series. The first event is a discussion on collecting and hording between William Davies King (UCSB Theater & Dance) and Rebecca Falkoff (New York University).  The second is a staged reading of King's play Collections of Nothing Enough is Enough.  Events are free but please register in advance.  Additional information and registration links are below.

Events are sponsored by the IHC’s Critical Mass series, the Hester and Cedric Crowell Endowment, the Department of Theater and Dance’s LAUNCH PAD series, and UCSB Library

William Davies King has spent a lifetime collecting nothing in a way he brought to light in his 2008 book Collections of Nothing. His collecting of such things as Cheez-It boxes, “Place Stamp Here” squares, hotel door cards, and the little stickers you find on fruit runs into the tens of thousands of items, all on the low edge of the valueless and the ephemeral. But he has also spent a lifetime engaged with the arts–drama, performance art, collage–and he has explored the ways the activity of the collector, who thinks through the world, connects to the work of the artist, who makes a world through things. Using exhibits, imagery, anecdotes, and ideas, he will open up the creative nexus of collecting and its power to re-create the world.

William Davies King is Distinguished Professor of Theater and Dance at UC Santa Barbara. He is the author of Henry Irving’s “Waterloo”: Theatrical Engagements with Late-Victorian Culture and History (1993), Writing Wrongs: The Work of Wallace Shawn (1997), “A Wind Is Rising”: The Correspondence of Agnes Boulton and Eugene O’Neill (2000), Collections of Nothing (2008), and Another Part of a Long Story: Literary Traces of Eugene O’Neill and Agnes Boulton (Michigan, 2010), and he is the editor of critical editions of Long Day’s Journey Into Night (2014) and The Iceman Cometh (2020).

An Oikos for Everything: Hoarding against Waste

The first decades of the twenty-first century have seen an explosion of interest in hoarding, and in those whose accumulated possessions overwhelm living spaces, rendering them unusable and often unsafe. Hoarding is the subject of recent documentary and feature films, novels, memoirs, self-help books, installation art, stand-up comedy acts, and of course, reality series. In her talk, Rebecca Falkoff will explore the relationships between hoarding and wasting, and the narratives through which they are antithetically conjoined. Modern literary and visual texts from Nikolai Gogol’s 1842 Dead Souls to Song Dong’s 2005 Waste Not present hoarding as a way of suspending matter between waste and use in a bounded space of potential.

Rebecca Falkoff is an Assistant Professor of Italian Studies at New York University. She recently completed her first manuscript, Possessed: A Cultural History of Hoarding, and is working on a new project about industrial chemistry and literature, Modernity in the Air. She has published on illegibility, flea markets, and the Ferrante phenomenon. Her work on Carlo Emilio Gadda’s scientific and technical writings was awarded the Romance Studies Early Career Researchers Essay Prize.

Staged Reading: Collections of Nothing Enough is Enough

The play delves into the mixed-up mind of the mega-collector and asks of that massive pile of stuff–thoughts, feelings, and jokes–the crucial question facing us all: What next?

Related Exhibit: The Creative Edge of Collecting: The “Nothing” of William Davies King

UCSB Library exhibited a selection of William Davies King’s ephemera collection in its first floor Mountain Gallery during winter quarter 2020. In The Creative Edge of Collecting, King confronts the social and psychological impulses to collect, and also the eye-opening possibilities of the sort of things that one might assemble. Shortly after the exhibition opened, COVID-19 struck, and the campus shut down all physical spaces. While UCSB Library remains closed to visitors, you can still see the exhibition online. Please click here for a walk-through with William Davies King. For more information about the UCSB Library exhibition, please visit https://www.library.ucsb.edu/events-exhibitions/creative-edge-collecting.