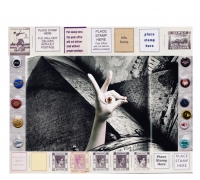 The Creative Edge of Collecting: The “Nothing” of William Davies King

Exhibition
Location:
Mountain Gallery
In The Creative Edge of Collecting, William Davies King confronts the social and psychological impulses to collect, and also the eye-opening possibilities of the sort of things that one might assemble.
Curator's Statement:
In 2008, UCSB Theater professor William Davies King confronted his lifelong practice of collecting things of little or no value, in his book Collections of Nothing (U. of Chicago Press). Since then, he has transformed the idle collecting of ephemera into something enduring and creative—a story, a teaching, a work of art. He offers this exhibit to the creative imagination of its viewers, with a nod to those who are intrigued by the quirky things that professors do.

Professor King’s course, "Collectors and Collecting," has reached hundreds of UCSB students with the message that collecting can be meaningful, therapeutic, and beautiful, even if the collected objects are as trivial as the little squares that say “Place Stamp Here.” He also pays attention to the hunters of first editions and rare jazz albums, and to those who gather (like Andy Warhol) cookie jars.

You will find collections in nearly every American household: some are virtual (e.g. Pinterest), some conceptual (e.g. palindromes); some stashed in the basement, some proudly displayed. People tend to collect, and collecting works with a kind of value different from that seen in the marketplace.

What King has done is confront the social and psychological impulses to collect, and also the eye-opening possibilities of the sort of things that one might assemble. This exhibit surveys the range of his efforts to think through the world by holding on to its least-prized fragments. In some cases, his collecting is mere accumulation. In others, he creates a special place—a frame—for how the world’s stuff can be appreciated. And in some cases, he transforms his collected material into a form of collage.

William Davies King is a scholar of theater history and has published numerous books and articles, including Henry Irving’s “Waterloo,” which won the Joe A. Callaway Award for Best Book on Theater. His recent work has concentrated on the Nobel Prize-winning playwright Eugene O’Neill, and his multimedia edition of O’Neill’s Long Day’s Journey Into Night won the 2016 PROSE award for Best Book in Literary Studies. He has been the dramaturg of numerous O’Neill plays and recently was a Travis Bogard Artist in Residence at Tao House, in Danville, California, where O’Neill lived during the peak years of his career.

Professor King is grateful to Alex Regan of UCSB Library for sponsoring this exhibition and to Susan Derwin and the staff of the Interdisciplinary Humanities Center for coordinating related events.

UCSB Library was delighted to exhibit this exhibition of King’s ephemera collection in its first floor Mountain Gallery during winter quarter 2020. Shortly after the exhibition opened, COVID-19 struck, and the campus shut down all physical spaces. While UCSB Library remained closed to visitors, William Davies King created this vitual walk-through.

Related Events:
Talks and stage readings: "On Collecting and Hoarding," a virtual discussion with William Davies King and Rebecca Falkoff was held on November 5th at 4PM as part of the Interdisciplinary Humanities Center Critical Mass Series.  An audio recording of this event is available here.