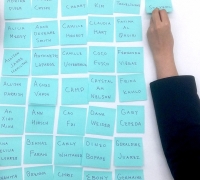 The UCSB Library will host an Art+Feminism’s Wikipedia Edit-a-thon on Friday, April 13, from 11:00 a.m. to 2:00 p.m. This event is part of a global campaign held during March and April in order to improve the coverage of cis and trans women artists on Wikipedia. 2018 is the fifth anniversary of the campaign. The edit-a-thon will include tutorials for the beginner Wikipedian, reference materials, and refreshments.

Founded by Siân Evans, Jacqueline Mabey, Michael Mandiberg and Laurel Ptak, Art+Feminism is a do-it-yourself campaign to improve coverage of gender, feminism and the arts on Wikipedia, and to encourage women editors. In a 2011 survey, the Wikimedia Foundation found that less than 10% of its contributors identify as women. Since 2014, over 7,000 people at more than 500 events around the world have participated in Art+Feminism’s Edit-a-thons, resulting in the creation and improvement of more than 11,000 articles on Wikipedia.

The Art+Feminism edit-a-thon is co-sponsored by the UCSB Library, the Department of History of Art & Architecture at UCSB, and the UCSB Art History Graduate Student Association.