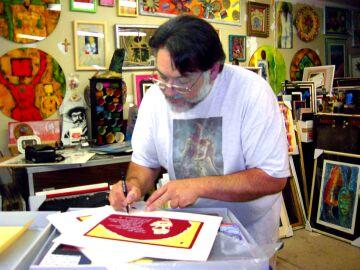 Luis C. Gonzalez (aka Louie-the-foot) is a prolific Sacramento, Calif. based artist whose paintings and poster art have been exhibited widely in this country and abroad.  Born in Mexico City, Gonzalez settled with his family in Sacramento where he completed high school and attended Sacramento State University. His creative work as an artist began in the 1960's. Gonzalez is a member of the renowned Royal Chicano Air Force, a collective of activist Chicano artists with whom he became associated as a youth; he also became involved with the United Farm Workers of America and its leader Cesar Chavez for whom he produced posters. His concern and support for the farm workers is a recurring theme in much of Gonzalez' work.

He acquired his nickname "Louie-the-foot" by arriving on foot at demonstrations and marches. He continues that tradition through his day job as a rural postal carrier. Gonzalez' aim is to foment pride in Chicano culture and history. He also is well known for his use of concrete poetry in his artwork. His combination of colorful graphic patterns and words in his many poem-paintings as well as posters reflect his bilingual cultural heritage as well as his sense of humor. Gonzalez comments, "my goal was to become a writer of Chicano stories. I had a fascination with words and the fact that I was bilingual only added fuel to the fire."

Gonzalez' silk screen print This is Just Another Poster was selected as the thematic icon for the national touring exhibition on Chicano graphic art by the same name, organized by the UCSB University Art Museum in collaboration with the California Ethnic and Multicultural Archives and the Center for the Study of Political Graphics.

The Luis C. Gonzalez Papers were formally established in the California Ethnic and Multicultural Archives on August 29, 2002. The collection, presently consisting of works of art on paper, is to grow over time and will eventually include photographs, slides, correspondence, lectures, and ephemera. A guide to this collection is forthcoming.