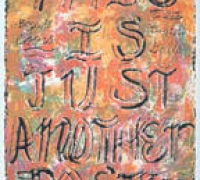 A major interpretive interdisciplinary traveling exhibition on Chicano graphic art in California was launched in 2000 and will tour through 2003. “Just Another Poster? Chicano Graphic Arts in California” is a comprehensive exploration of the critical role posters and other graphic materials played in the Chicano struggle for self-determination. The form and content of this art reflects the bilingual and bicultural context of Mexican Americans, known as Chicanos, living in the United States. On display are posters that recapture a Mexican heritage while creating a distinctive Chicano identity.

The stories of Chicanos living in America are told in the vivid art of posters, which originally disseminated their messages from building walls, telephone poles, and other surfaces on the urban landscape. These powerful graphic works, created by artists to raise awareness and rouse conscience, can be seen in a groundbreaking exhibition of more than one hundred examples by fifty-seven Chicano/a artists.

The exhibition examines not just the profound role art played as a part of the Chicano civil rights movement, but also the remarkable effectiveness of the poster medium itself. Chicano/a artists use the poster as a visual tool to articulate the goals and issues that are important to their communities. They build a communications network on the walls of homes, stores, and offices that allows people in different places to share the same symbols, to appreciate the same aesthetic forms, and to enjoy the same humor. From the 1960s, posters have been essential to the social, cultural and political life of Chicano communities.

No other state in America compares with California in the scope, complexity and range of Chicano poster production. Much of the work in this exhibition was produced in association with one of six major Chicano art centers and cooperatives: Royal Chicano Air Force/RCAF (Sacramento), Galería de la Raza (San Francisco) and La Raza Silkscreen Center/La Raza Graphics (San Francisco), Self-Help Graphics & Art (Los Angeles) and the Mechicano Art Center (Los Angeles), and Centro Cultural de la Raza (San Diego). All but the Galería de La Raza were centers of poster production. These centers offered different ways of moving between cultural politics and fine arts approaches to Chicano poster making. This diversity of approach is reflected in the forms and styles of the work itself, from silkscreen to digital, and from traditional to postmodern pastiche. For largely working-class communities marginal to the mainstream world of galleries and museums, these art centers were the first public places where Chicano artists could develop and showcase their talents.

“Just Another Poster” explores how the poster, with its affordability, quick and varied methods of production, graphic assertiveness within both urban and rural contexts, continues to function as a mechanism for helping call communities into being. The exhibition includes over 100 graphic images (mostly silkscreen prints) by such artists as: Lalo Alcaraz, Leonard Castellanos, Yreina Cervántez, Richard Duardo, Ricardo Favela, Rupert García, Louie ‘The Foot’ González, Ester Hernández, Ralph Maradiaga, José Montoya, Malaquias Montoya, Herbert Sigüenza, and John Valadez. Most of the posters have been drawn from the California Ethnic and Multicultural Archives (CEMA), Department of Special Collections, Davidson Library, UCSB. The archives of the Center for the Study of Political Graphics in Los Angeles also provided many posters.

Organized thematically, the exhibition begins by questioning whether Chicano posters are more than “Just Another Poster,” an expression borrowed from the text of Louie ‘The Foot’ González’ 1976 “boycott Gallo, boycott Coors” announcement poster. The ironic implication is that this playful silkscreen print is doing something more than calling for political action. Posters such as this one are distinctive artistic devices meant to express the values and concerns of the communities their images depict.

The first part of the exhibition looks in depth at how Chicano posters function to stimulate political action, build community, oppose U.S. immigration policies, and promote solidarity with international liberation movements. Posters became a primary tool for communication and mobilization within the Chicano activist movement for political and social justice, especially in supporting the United Farm Workers (UFW). Andrew Zermeño's famous poster, Huelga! of 1965, introduces the UFW eagle, which became a key symbol of the movement. Other posters advertised community events, ranging from musical productions and art exhibitions to demonstrations and rallies, filling the public spaces of Chicano communities with images that provoked powerful memories and associations. Many posters called for the end of unfair immigration practices and often did so with imperative texts reflecting the urgency of the issue, like Rupert García's ¡Cesen Deportación! Graphic images produced by Chicano artists expressed solidarity with other oppressed peoples at home and abroad. Posters opposed the war in Southeast Asia and supported liberation movements throughout Central America, like Malaquias Montoya’s Viet Nam Aztlan Fuera.

The second part of the exhibition explores the distinctive iconography of Chicano posters. Graphic imagery draws on a Mexican cultural and artistic legacy at the same time it creates a unique Chicano visual language. The key example is the calendario, which has its roots in Mexico, and combines in its traditional format the days of the month with popular images. Mexican calendar images have provided some of the most memorable icons in Chicano art. Chicano/a artists use this broadly disseminated vernacular form to reflect on contemporary social and political issues and often do so through highly aestheticized imagery that overwhelms the calendar’s function.

Chicano posters reinforce such important cultural symbols as the Virgin of Guadalupe, the pachuco of youth culture or the calavera of the Day of the Dead. The Virgin is considered among the most important Chicano icons in her symbolization of faith, justice and divine femininity. The Chicano use of the calavera can be traced to the satirical art of Mexico's most famous late 19th century graphic artist José Guadalupe Posada, who critiqued political and social programs with skeletal figures. Images of pachucos, cholos and punks express alternative youth culture and are emblematic of contemporary Chicano urban identities, as epitomized in José Montoya’s famous 1978 Zoot Suit.

“The poster is ideally suited to the Chicano experience in all its diversity and complexity,” according to the exhibition’s curators, who said, “Its formal qualities can be appreciated on their own terms, while its content and messages reveal much about Chicano history and culture.” The images in the exhibition move from the political activism of the 1970s to the impact of global capital, national politics and mass media in the 1990s. During the past three decades, collections of graphic art formed by manual distribution systems and very small print runs have given way to the electronic age’s limitless possibilities. But despite the changing social, political and technological landscape, the exhibition concludes by showing that the poster remains a dynamic and aesthetically compelling medium for Chicano/a artists.

Image caption: This is Just Another Poster Louis 'the Foot' Gonzales, 1976

Links about "Just Another Poster" Exhibit