In the Limelight: Diversity on Stage 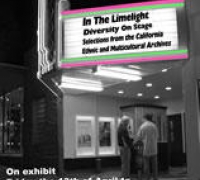 In the Limelight was on display in the Special Collections Department from April 13 through June 30th. Featured were works from CEMA’s growing performing arts collections. This exhibit included original scripts, photographs, graphic art and collectibles autographed by the likes of Cesar Chavez, Luis Valdez, and Jane Fonda.

On exhibit were works from El Teatro Campesino, considered the most influential Latino theater company in the country. Founded by Luis Valdez, El Teatro Campensino’s first stage was the flatbed of a truck used for the benefit of hardworking laborers in the farmlands of California. The display featured a German poster announcing the Teatro’s La Carpa de los Rasquachis. Also included was José Montoya’s silkscreen of Zoot Suit, the first play by a Chicano playwright performed on Broadway.

UCSB alumni and celebrated playwrights Frank Chin (1965) and Philip Kan Gotanda (1974) were also on display. Chin is founder of the Asian American Theater Workshop, and playwright for Chickencoop Chinaman and Year of the Dragon. Gotanda’s Fish Head Soup and Dream of Kitamura were among the plays highlighted.

Genny Lim's Paper Angels tells of the hardship endured by Chinese immigrants during their confinement on Angel Island. Elizabeth Wong’s first draft of The Laundry is a hilarious teleplay for a Seinfeld episode, while her play script China Doll depicts the tumultuous life of Anna May Wong, the first Asian American actress to reach iconoclastic status.

Dan Guerrero’s Gaytino! is an autobiographical comedy that engages the audience through decades of Chicano history and the gay experience from a unique and personal perspective.

Also displayed were historical photographs used by Velina Hasu Houston for her play, Tea, a story about five Japanese war brides, each married to an American soldier of a different race.

Rounding out the exhibit was Sojourner Kinkaid Rolle’s Ayo’s Journey, a multidimensional theater performance about the transatlantic slave trade, based on a 12-poem cycle.