Undergraduate Ty Saylors: "I Would Have Been Lost" Without Librarians 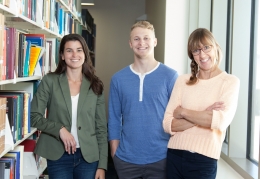 Use Google to search for “D.A.R.E.” (Drug Abuse Resistance Education), and the top 10 results include the organization’s official website, but also the video for the Gorrilaz song “DARE.”

Use Web of Science, an online subscription database available to UCSB students via the UCSB Library’s website, and you get a list of scholarly articles and studies about the drug-prevention program.

Ty Saylors, a third-year pharmacology student, recently took UCSB Library’s INT1 course, a hands-on class taught by UCSB librarians Jane Faulkner and Chelsea Heinbach on how to find and evaluate information using library resources. He used his newfound knowledge to conduct research on D.A.R.E for an essay in a UCSB writing class.

Before taking INT1, Saylors said, “I would have been lost, going 100 percent through a Google search.”

Saylors said Google might help students “fake their way through a research paper, but they don’t have the primary research materials available through university library databases. Learning how to use them made my research and sources more reliable.”

Saylors initially decided to take INT1 to fill a hole in his schedule, he said. To keep his scholarship, which requires that he take 12 units each quarter, Saylors needed a one-credit class. He chose INT1.

“I didn’t expect much going in, but the class and instructors ended up being really awesome and engaging,” Saylors said.

For the writing class, Saylors had to write an essay about public policy. He chose D.A.R.E., and learned through library research about studies that show more effective ways to fight substance abuse.

As a science major, Saylors said he’s used to conducting his own research. “I’ve done so many lab essays, reports, and field studies, but never seen where others’ articles about these things end up,” he said.

Saylors continues to use his library research skills.

“I’m finding research applicable to the labs I’m doing,” he said. “If I’m lost on what’s going on with a certain chemical reaction, for example, it helps to see someone else’s research in a similar situation.”