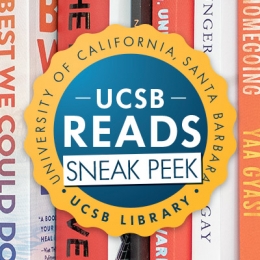 This summer, read along with the UCSB Reads Committee as they work to select the UCSB Reads 2019 book.
The UCSB Reads Committee has announced the six titles that make-up the short list for 2019 consideration. The selections are:
1. "The Best We Could Do" by Thi Bui
2. "Hunger" by Roxanne Gay
3. "The Hate U Give" by Angie Thomas
4. "Sing, Unburied Sing" by Jesmyn Ward
5. "Binti" by Nnedi Okorafor
6. "Homegoing" by Yaa Gyasi
Give them a read and let us know what you think! Submit feedback on Facebook by mentioning @UCSantaBarbaraLibrary and using #UCSBReadsSP. Then stay tuned as we announce the UCSB Reads 2019 selection this Fall.
UCSB Reads is an award-winning campus-wide and community-wide “one book” program led by the UCSB Library since 2007.
Posted on: 07/17/2018 - 13:11
Topics: Events, Graduate Students, UCSB Reads, Undergraduate Students