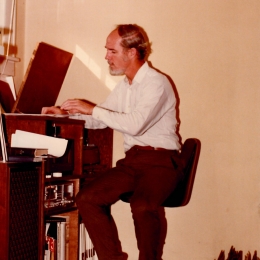 UC Santa Barbara Library Special Research Collections was given an impressive collection of theatrical Shakespeare recordings last fall, a legacy of scholar and author, Dr. Robert J. O’Brien, who accumulated the collection over his many years of study, collection, and travel.

“My dad was passionate about preserving voices,” said O’Brien. “Looking at a photo, my dad would say, ‘We know what they LOOK like, but what do they SOUND like?’”

This passion developed while Dr. O’Brien was an undergraduate studying English at Louisiana State University in the late 1950s. He “discovered for the first time how delightfully amusing Shakespeare can be” while listening to a professor recite. He wrote articles on Shakespeare as a college student, mostly regarding the meter and formation of a verse.

He was so zealous about his studies that he went on to get his Doctorate and then taught at West Virginia Wesleyan College and the University of Maryland in Asia and Germany.

The time spent listening to Shakespeare turned into a consuming passion to collect recordings of Shakespeare. His collection of over 1,200 disc recordings and 200 CDs date as far back as 1911. There are many recordings of well-known actors such as Sir Ian McKellen, Christopher Plummer, Dame Judi Dench, John Gielgud, and Dame Maggie Smith. There are some surprises like Edwin Booth, Jayne Mansfield reciting Shakespeare, and Andy Griffith with a comic view of Hamlet.

Later Dr. O’Brien was delighted to add several non-English recordings, including Spanish, French, German, and Hebrew. Dr. O’Brien considered his Shakespeare discography incomplete because on occasion he would continue to discover a rare or unusual recording that was not included in his collection. As part of the Library’s offerings, O’Brien hopes that the collection will allow aspiring actors and scholars to listen and to study the diction and meter performed by a variety of people in a variety of languages.

“Dr. O’Brien’s collection is unique because the discography is diverse and wide-ranging,” says Performing Arts Collection Curator David Seubert. “It offers students and other scholars the opportunity to contrast performance styles across recordings and gain a deeper understanding of Shakespeare in all of its iterations. We are honored to house this impressive collection and accompanying endowment at the UC Santa Barbara Library.”

Dr. O’Brien’s goal was to provide as much history of a recording as possible and make this information available to everyone. As a student and later driving to visit his children, Dr. O’Brien paid close attention to actors’ delivery of iambic pentameter. In “The Player’s Guide to Reading Shakespeare Aloud,” he provides instruction for preserving iambic pentameter. Dr. O’Brien’s own voice was preserved by StoryCorps in 2018.

“I am very thankful the UC Santa Barbara Library agreed to become the curators of his collection of Shakespeare recordings and papers. It is a culmination of one of his life’s passions,” remarks O’Brien. “The recording collection stands as a testament to the rich and very long oral history of Shakespeare.”