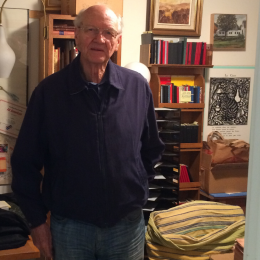 UC Santa Barbara Professor Emeritus John Ridland passed away in Santa Barbara on January 29. Professor Ridland taught for over 40 years at UCSB, retiring in 2005. He was one of the founding faculty of the College of Creative Studies and a professor in the English Department, focusing on Robert Frost studies.

As a research professor, John specialized in poetry and translation. His poems were published in The Hudson Review, The Atlantic, Harper’s, and other outlets. Professor Ridland was widely recognized for his translations of Hungarian literature, most notably the epic poem Janos Vitez (John the Valiant).

In 2010 he was recognized with the Balint Balassi Sword Award, an engraved ceremonial sword bequeathed by the Consul-General of Hungary to the United States. Also recognized locally, in 2017 John was inducted as a “Mid-Coast Literary Treasure” by the Ventura County Arts Council.

John’s papers are held at the UCSB Library Department of Special Research Collections and are open for research. Items in our archives include drafts of his poems and translations; correspondence with editors, other writers, and friends; personal diaries; notes on poetry readings; teaching files; biographical files; and audiovisual recordings of many of his lectures, interviews, and readings.