The Power of Pictures: The World Comics Collection 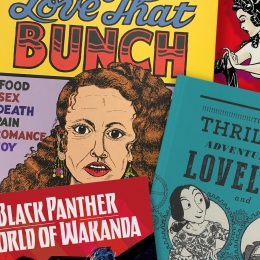 "In comics at its best, words and pictures are like partners in a dance and each one takes turns leading.” — Scott McCloud

Across the world, graphic narratives take many different names—comics, manga, manwha, zines, cordeis, and many more—with each exploring new territory within the “dance” between words and pictures. Although they have grown recently in popular culture, they are the product of a unique, worldwide art form that reaches back hundreds of years.

With the advent of mass print publishing, graphic narratives have formed an integral part of cultural identity and expression and allow us to explore self-identity and individualism, reflect on political climates and humanitarian issues, and—notably present in popular American comics—give life to the supernatural.

In 2011, Professor Emerita Miriam Wattles from the UC Santa Barbara History of Art & Architecture department initiated the idea of creating a comics collection within the Library, and has continued to add to and nurture the collection alongside the Library’s subject librarians. Thus began the UCSB Library World Comics Collection.

Nearly ten years later, the collection has grown into a multilingual amalgam of bandes dessinées, cartoneras, comic books, comic strips, cordeis, graphic novels, manga, manhwa, print cartoons, zines, and much more. In keeping with current national entertainment, there are even weekly donations of brand new Marvel and DC Comics from librarian Chuck Huber, freely available to pluck off the shelf and read in one of the Library’s many cozy chairs.

In addition to the more popular titles, librarian Chizu Morihara describes the collection as “incredibly diverse” and capable of connecting with a wide variety of communities. The comics in this collection—along with graphic narratives in general—can be particularly powerful, moving beyond superhero entertainment to touch on a number of difficult and culturally relevant topics.

For example, the Pulitzer Prize-winning graphic memoir Maus by Art Spiegelman has been used as a discussion point in the Department of History’s introductory Holocaust course, taught by Professor Harold Marcuse, highlighting the struggle with inherited trauma.

The depth of the collection has also been celebrated in a class taught by Dr. Wattles, who led her students through discussions on various titles. The class attracted a wide variety of students from backgrounds in both humanities and sciences, and the curriculum dove further into the narratives, re-examining popular titles from deeper perspectives.

“Students who had read the comics before would come back and say, ‘I’ve read this so many times and never thought about it this way,’” Morihara described.

Comics can be particularly fragile objects and present a unique challenge for conservation. “Comics weren’t made to last forever,” Morihara comments.

The Art & Architecture Collection’s current preservation method involves placing comics in individual pamphlet binders, otherwise referred to as “pam-binds,” to increase shelf-life longevity. The accumulation of pam-bind costs, student training/work, and the time it takes to complete a single comic issue results in a costly and time-consuming operation. With hundreds of comics still in line for processing, the Library relies on funding support to maintain the collection and keep it accessible to students.

The excitement students have about the collection is palpable, which is reinforced by its status as one of the most circulated sections. Unique for its availability as an “open” collection, as opposed to being stored among closed stacks, its print components occupy the first row of shelving in the Art & Architecture Collection, waiting to be browsed.

Morihara emphasizes the fortune of having such a substantive print collection available to students and community members. “With so much web material available... students miss out on the serendipity of what they could find among the shelves,” she says.

While the current building closure may prevent you from finding the comics among the shelves at this time, items from the World Comics Collection are now available for request through the Library's new pickup and mailing service.