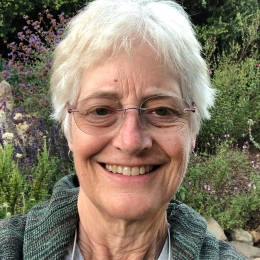 During her talk, Taves advocated that instead of arguing over what counts as religious or political, we can view both from a “worldviews” perspective that emphasizes humans’ apparently unique tendency to act and reflect on “big questions” such as the nature of reality, and how we should behave toward one another.

Our Events & Exhibitions Librarian Alex Regan followed up with Taves to ask how she is thinking about her worldview research in light of the COVID-19 pandemic. Read their exchange below.

Alex: During your fall talk, “Is politics our new religion?", you asked us to consider the current polarization in American society in terms of conflicting worldviews, arguing that we can view both politics and religion as attempting to answer the big questions that structure our worldviews. Is the current COVID-19 pandemic affecting how you think about our national polarization?

Ann: I remain convinced that the big questions I outlined in my talk are good tools for analyzing people’s responses. In thinking about the pandemic, “the situation in which we find ourselves” is obviously a big factor in terms of how we respond. The pandemic has made me much more acutely aware of the divide between those of us who can work from home and those who can’t and, as a result, have either lost their jobs or are putting themselves at risk day after day.

It’s also heightening my awareness of the divide between those of us who long for coherent, coordinated science-based federal leadership and those who think the response to the pandemic is overblown. In the absence of federal income support for those who have lost their jobs, I can understand why some want to reopen the economy quickly and why many are now forced to risk their health to survive financially.

There is also polarization with regard to “how we know” (another of the big questions).  What scares me the most are the people who reject science as a basis for knowledge and allow conspiracy theories and religion to fill the explanatory void. Last week, Brian Lee Hitchens, an Uber driver who is still hospitalized with the virus, spoke out to let people know that he now realizes the virus is not “some made-up thing.” In an interview on the local news station, he said “I thought it was maybe the government trying something, and it was kind of like they threw it out there to kinda distract us … I’d get up in the morning and pray and trust in God for his protection, and I’d just leave it at that.”

His views are echoed in conspiracy theories that are gaining traction. The Atlantic Monthly is focusing on this development in its Shadowland Project, a series of in-depth articles on conspiracy thinking that I so far find very illuminating. Although such thinking is more a mindset than a partisan ideology, it combines paranoia, populism, and religious faith to create a toxic brew that again illustrates why we should avoid artificial distinctions between religion and politics.

Alex: Do you think this unusual moment we are currently in might lead to profound changes in our country’s spiritual, secular, or religious life?

Ann: Yes and no.  As I think about the religiously inflected conspiracy theorists rejecting the views of epidemiologists in favor of decoding the hidden, deeper meanings in current events, I am reminded of the two-pronged religious response to the two chief threats to traditional religious views in the 19th century – evolution and historical critical methods.

The fundamentalist reaction was to reject science and dig deep into the Book of Revelation and other apocalyptic texts to ferret out the hidden messages they convey regarding the end times.  Nancy Oreskes, historian of science at Harvard, refers to this as “implicatory denial,” that is, a denial of science due to the cost of accepting the implications.  The pandemic, she suggests, is challenging the evangelical-backed Republican view that big government (and experts) are unnecessary. From a worldviews perspective, she is highlighting the fact that our worldviews – religious and secular – are built around stories of who we are, where we come from, and where we are going. These may be stories about individualism, self-reliance, limited government, the fallibility of experts, and the literal truth of the Bible.

Others of us are grounded in stories about collective action, interdependence, and the value of expertise.  The stories we tell about who we are shape our goals and inform our actions.  Any of us can cling to our stories in the face of challenging information. Most religious believers, now and in the past, have been more flexible.  They have demonstrated a remarkable ability to integrate potentially challenging scientific findings into their worldview, that is, to adapt and retell their stories in light of new information. Although I’m frightened by the religiously motivated skeptics, most religious groups – leaders and congregants – recognize the threat that large gatherings in enclosed spaces pose to their members and are responding creatively.  Rather than reject scientific expertise as a threat, they embrace it and draw from their traditions to help their congregants weather the storm and find meaning and purpose in the midst of disaster.

Alex: What are you reading, watching and/or listening to right now?

Ann: I am still monitoring the news.  So far I’ve just read one of the articles in The Atlantic’s Shadowland Series -- “The Prophecies of Q” – but I plan to read the others. I do that with my scholarly hat on. To save myself from despair, I am reading Molly Ball’s new book on Nancy Pelosi. Pelosi gives me hope that we do have someone in a leadership role who is thinking deeply and strategically about the role of the federal government in responding to the pandemic.