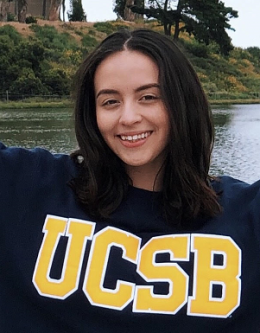 Weeks before the Library closed in response to the COVID-19 shelter-in-place order, a new exhibit "The Creative Edge of Collecting: The 'Nothing' of William Davies King" went on display on the 1st Floor, Mountain Side of the Library. The exhibit, which features ephemera collected by UCSB Theater professor William Davies King, confronts his lifelong practice of collecting things of little or no value.

Alex: I know Professor King has a very large collection. How did you decide what to include and what to exclude?

Rhiannon: During the initial weeks of prep for the exhibition, I visited Professor King’s home where he stores most of his extensive collection. Extensive may be an understatement! We spent a few hours going over the contents of his boxes, binders, and closets. I wanted to create an exhibition that would tell a life story of Professor King, how his collecting morphed and became what we know today as his style of “bibliolage.” I found it more difficult excluding items because I felt like every piece, big or small, had a story to tell.

Alex: What did you like most about working on this project?

Rhiannon: My favorite part of the project was the hands-on experience and creative freedom. I had all access to the display cabinets and was able to lay down each object individually, including the three large poster boards hanging above the displays.

Alex: What were some of the challenges you faced curating this exhibition?

Rhiannon: Those three poster boards were very tricky! At first, we used push pins to secure the collages. When those became a threat in damaging the wall, we switched to double-sided tape. Once that was completed (and after retaping the ones that fell off) we attempted to hang the boards with D rings. Quickly learned that they weren’t strong enough. Finally, we opted for a simple hole punch and clasp. It took about three to four attempts. We climbed up and down the ladder numerous times before we figured out how to best hang them, but it was worth it!

Alex: What did you learn or take away from this experience?

Rhiannon: I learned the importance of time management and communication. Originally, this was a project that was shared between myself and another student. Due to unforeseen circumstances, I had to take the lead and finish the exhibition on my own. This was my first solo exhibit since declaring my major, so the pressure was on. Between the project, and my own personal workload from school, It felt like an orchestrated dance. I was pleased with how it turned out.

Alex: What did you think was the coolest part of the exhibit?

Rhiannon: The coolest part of the exhibit is Professor King’s collage books in the third and fourth cabinets. It’s not accessible to the public since they are under the glass, but if you had the chance to swing by King’s office, he’d love to show them to you. If I didn’t know any better, I would think those books came printed like that! His precision in the application, along with the thoughtfulness of each image really brought those books to life. My favorite two on display are “Big Farmer/Big Jesus and Feuermann/Vermeer.”

Alex: Was there any part that left you baffled?

Rhiannon: You would be surprised how neatly King stores his collection. I had this expectation of boxes and boxes stacked ceiling-high; however, you would never guess his favorite pastime by walking through his home. Everything was neatly stored, it was quite impressive. “Organized Chaos.”

Alex:  What are some of your educational or professional goals?

Rhiannon: This is my first year at UCSB. I transferred from Moorpark Community College. By the end of 2021, I hope to obtain my B.A in Art History and continue toward a PhD. I dream to be able to travel the world and immerse myself in the arts, curating exhibitions as I go along. If all goes as planned, I would return and become a professor in my field of study.

Watch a walk-through of the exhibit with William Davies King.