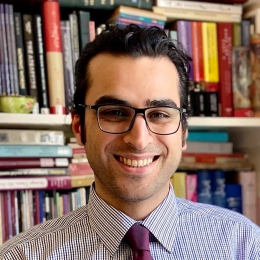 Last year, he won the Ahmad Shamlou Poetry Award - the most prestigious award in Persian poetry - for his work entitled The Long Poem of Circumstances.

No stranger to libraries, while studying at St. Andrews, he cataloged rare books in the Special Collections Division and also worked as their senior library assistant for the Iranian studies collection.

He said he was attracted to the position at UC Santa Barbara because of its many scholars and resources with a focus on Persian Studies as well as the university’s interdisciplinary nature.

“I wanted to be somewhere where I can keep up with the latest research,” said Sonboldel. “Librarianship provides a way to know literature better every day. This is something that gives me joy.”

Sonboldel is also the new book review editor for MELA Notes, the official journal of the Middle East Librarians’ Association. He has four books published in Persian and came out with a new book in November.

Since Sonboldel was a teenager growing up in Karaj, Iran, a suburb of Tehran, he has been passionate about poetry. His work became more political after the Green Movement in Iran in 2009.

“More than any books I read or lectures I listened to, the movement changed my work and motivated me to do research,” Sonboldel said.

Also known as the Persian Awakening or Persian Spring, mass demonstrations erupted in Iran following what protestors believed to be a fraudulent presidential election. Supporters of the movement demanded not only an overhaul of the political system but also more freedom and civil rights.

“After 2009, everything in my life was centered around politics,” Sonboldel said. “Now in my work and studies, I always ask ‘So what? How can this change the world?’”

With these questions in mind, Sonboldel says he looks forward to working with faculty and students and curating the collection at UCSB.

“UCSB Library is being progressive by planning for the future based on data,” he said. “We constantly look for novel tools for research and teaching.”

Having moved from the U.K. to Santa Barbara with his wife in September, Sonboldel is very new to the country, city, and campus, but is quickly building connections here.

“The faculty and staff at UCSB are incredibly kind and welcoming,” said Sonboldel. “I look forward to meeting more people on campus.”