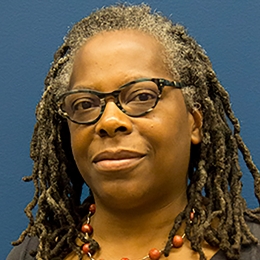 After a career at UCSB spanning more than two decades, librarian Sherri Barnes retired at the end of January. She led the Library to the forefront of the movement for open access research as the Library's first Scholarly Communication Program Coordinator, her most recent role.

Throughout her time at the UCSB Library, Barnes has also served as subject librarian for Feminist Studies, LGBT Studies, and U.S. History, while also serving as Humanities Collection Coordinator.

Originally from the Bay Area, Barnes has spent much of her life in the California public school system and in academia. After transferring from Cabrillo Community College in Santa Cruz, she got her first library job reshelving periodicals as a work-study student during her undergrad years at San Francisco State University.

She fell in love both with the service aspect of a library and the proximity to information. “I just loved it,” she said of being exposed to so much information, helping students to find what they were looking for, and the continuous learning process. She later attended UC Berkeley to study library and information studies.

“When I first entered library school, the internet was just coming out,” said Barnes. “Over the course of my career, technology and the internet have changed every facet of librarianship. Although the library building will always be necessary and beloved, we’re realizing how much we’re able to do without it.”

While the internet enabled more widespread access to information, this shift paralleled skyrocketing prices of scholarly journal subscriptions that are increasingly putting academic articles out of reach even for the largest research universities. In the latter part of her career, Barnes became dedicated to finding innovative ways to eliminate barriers to information access.

“It sort of just happened,” she said with a chuckle on why her work skewed into scholarly communication around 2010. As the open access movement was growing, Barnes became the coordinator of an internal group to look into how humanities publishing was impacted. At the time, most of the open access discussion was centered primarily in the sciences.

Barnes was integral to UCSB’s present partnership with Punctum Books, an open access publisher where “an author’s style and voice is privileged over the market and other commercial forces that often drive the publishing choices of university presses and for-profit publishers.”

Of this partnership, Barnes said, “Not only has it been the most fun, but it is a great model of how combining the editorial and design expertise of scholars with librarians’ expertise in the discovery, access, and preservation of the scholarly record can contribute to fostering the financial and operational sustainability of mission-driven, scholar-led academic publishing.”

Barnes says her greatest legacy is empowering UCSB faculty to envision a scholarly communications system of the future where commercial influence isn’t so formidable a presence and they are better positioned to retain the rights to their own work.

“Even though open access seems complicated, authors have more power and influence than ever before,” said Barnes. “I’m proud of our faculty who have gone from being skeptics of open access to being influencers of it and being empowered to make their work open access.”

The future of open access, Barnes says, is in the transition. “The debate is finished, open access is a new norm and it will continue to grow and expand.”

Barnes will deeply miss the UCSB community and seeing research germinating into discovery, but she will continue being involved in the open access movement by serving on the board of Punctum Books. She says that in retirement, she will split her time between Ventura, Calif. and Detroit, Mich., where her husband, poet Geoffrey Jacques, grew up.

The Library is deeply grateful to Barnes’ commitment to our students, faculty, and lifelong learners.