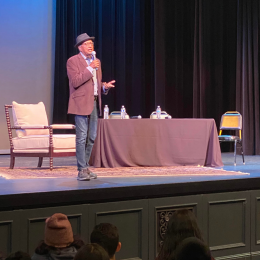 Floyd Norman, who made history in 1956 as the first African-American animator at Disney Studios, returned to his alma mater, Santa Barbara Junior High (SBJH), on Feb. 28 to speak about his successful career at the place it all began.

The event was part of SBJH’s recognition of Black History Month and was co-hosted by UCSB Library, which recently acquired Norman’s papers in its Special Research Collections.

From making beloved classic movies to working alongside Walt Disney himself, Norman recounted working on The Jungle Book, Sleeping Beauty, and 101 Dalmations.

“I’ve enjoyed every film I’ve worked on, but I liked working with Walt Disney on The Jungle Book,” said Norman. “That was his last movie before he died, and that film will always be special to me.”

Norman said he discovered his love for drawing at a young age. Being raised in Santa Barbara and surrounded by a community with many entertainment industry professionals, he was supported in pursuing the arts as a career. He said he became particularly interested in motion pictures and animated cartoons while browsing books in the SBJH Library.

Upon graduating high school, he attended the ArtCenter College of Design in Pasadena. With his college degree in hand, he received a job offer at Disney, where he would eventually become one of the few employees to work under every management of the company.

Over the span of his career, technological changes have accelerated the animation process. Adapting to these shifts, however, didn’t deter or discourage Norman.

At the end of the event, Norman left students with advice to follow their dreams.

“Believe in your dream and go for it,” said Norman. “Be willing to do the hard work to make that dream come true.”

For anyone interested in learning more about Norman, his papers are available at UCSB Library for the public to view upon request.