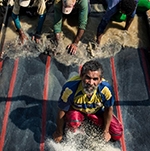 The photos are chilling: Giant swathes of devastation in the Brazilian Amazon. Men hip-deep in the brown muck of the gouged and flooded earth. They are the scenes of illegal gold mining in "Garimpeiros: The Wildcat Gold Miners of the Amazon Rainforest," an exhibition in the Ocean Gallery of the UC Santa Barbara Library through Aug. 31.

Curated by Jeffrey Hoelle, an associate professor of anthropology, and Jonathan Rissmeyer, library senior artist, the exhibit of 42 photos explores the world of wildcat miners, or garimpeiros, who try to make a living scratching gold out of the rainforest.

Hoelle, the author of “Rainforest Cowboys: The Rise of Ranching and Cattle Culture in Western Amazonia” (University of Texas Press), has spent considerable time among people scratching out a living in the dense wilds of Brazil. In 2015 he was invited to visit the mines by Peter Richards, an economist, now at the U.S. Agency for International Development, and Michael Klingler, a geographer and photographer from the University of Innsbruck in Austria. The research project was sponsored by a grant from National Geographic Society, and aimed to provide a deeper understanding of the vilified and misunderstood gold mines located deep in the Amazon rainforest.

Although the environmental havoc is undeniable — illegal mining destroyed nearly 1,700 kilometers of rainforest between 2003 and 2013 — Hoelle said he was interested in the culture of the garimpeiros and how their actions were linked to a global economy.

“It’s easiest to blame the miners for all of this, but why did they do it?” he said. “In the exhibit we present some of the individual motivations, but there is more of a systematic explanation for what is driving this. I have studied cattle raising, which is the leading driver of Amazonian deforestation. With cattle, you can understand, on some level, that this destruction provides food. But with gold, what is the explanation?”

Hoelle said visiting the mines forced him to think in a deeper way about gold as a valuable commodity: something dug from the ground and turned into a symbol of wealth and prestige. That value, he said, is “very cultural — people decide that gold, or bitcoin, for that matter, has value. Questions about culture and value are especially important now because what we eat or wear has very real environmental consequences in specific sites of destruction, such as what I saw in the Amazon rainforest, but also on a global level.”

In the end, though, Hoelle said the exhibit “is more about trying to bring people into this complex world where there are real people — showing what daily life is like, sharing some of the incredible stories of people who left it all behind for a shot at riches or just a slightly better life, which they could not get if they continued on as maids, construction workers or farmhands.

Excerpted from an article by Jim Logan which appears in full in UCSB's "The Current".