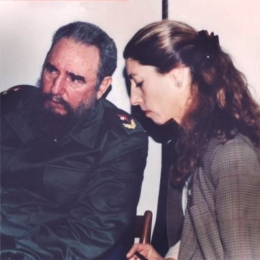 What do Fidel Castro, Sid Vicious, JonBenet Ramsey, Larry Rivers, William Burroughs, and Benazir Bhutto have in common? They are all subjects of investigative reporting by the award-winning American journalist Ann Louise Bardach.

In 2018, the UC Santa Barbara Library Department of Special Research Collections acquired Bardach’s lifetime career research files, documenting her eclectic and deeply reported journalism from 1979 to 2018, as well as the five books she authored or edited.

Included in the collection are a vast array of research materials, correspondence, scores of photographs by several acclaimed photographers, state and federal files, financial records, handwritten notes and personal letters, interview transcripts, articles, and audio recordings of interviews with many of her well-known subjects.

UCSB Library patrons, the news media, and film producers will continue to turn to her work for research and inspiration. On Oct. 21, HBO will premiere an original documentary featuring Bardach. The film, “537 Votes,” examines the chaotic voter recount in Florida during the 2000 presidential showdown of Bush vs. Gore. As "the go-to journalist on all things Cuban and Miami," according to the Columbia Journalism Review, Bardach discusses how and why the Elián González custody battle was pivotal to the end result.

Additionally, the creator and producer of the Showtime television series, “Homeland,” is co-writing a new television series based on her five-part New York Times 1998 feature on Luis Posada Carriles, the Cuban exile militant. A former Central Intelligence Agency asset, Posada was Fidel Castro’s would-be assassin, a career spanning a half-century.

Documenting an Array of Political and Cultural Figures

Notably, the UCSB Library has acquired all of her materials related to the U.S. government’s case and trial of the anti-Castro militant, including those that were subpoenaed by the FBI and the Department of Justice. Posada’s handwritten notes and the audio of his three days of interviews with Bardach that were the basis for the New York Times series are now available for research.

In addition to Posada, Bardach has extracted damning admissions from an array of political and cultural figures, from The Sex Pistols’ Johnny Rotten to Watergate burglar, E. Howard Hunt.

“Annie's collection is an incredibly valuable research tool and is widely used, especially in the area of US and Cuba relations,” says Danelle Moon, Director of UCSB Library Special Research Collections. “Her collection is a perfect example of how archives can have an indefinite impact on future scholarship.”

Bardach has covered an unusually eclectic range of political and cultural issues, making the collection as diverse as Bardach’s own life and career.

“Because I was more of a general assignment reporter - prior to my dive into Cuban politics,” says Bardach, “What the Library now has of mine is just about the kitchen sink of journalism - from the Manson murders, Punks, Beats, then the Cuban-Miami wars and some general Latin America.”

Some of the major subjects and people covered in the collection include the life and trials of Miami’s epic-exile leader, Jorge Mas Canosa, Cuba-United States relations, Fidel Castro and his family, JonBenét Ramsey, Arnold Schwarzenegger and numerous political figures, and high profile murder cases such as Bobby Beausoleil, the first Manson case.

She has been frequently seen and heard on television and radio, including several times on 60 Minutes and The Today Show, and many times on NPR. She has written for virtually all the major media in the U.S. and the U.K. - from the New York Times, Washington Post, POLITICO, and the Los Angeles Times - after a decade-long stint at Vanity Fair magazine.

Bardach was a finalist for the 1993 PEN Award for her investigation into Europe’s homegrown Islamic Fundamentalism for Vanity Fair. In 2005, she was again a finalist on several lists for her deep dive into Governor Arnold Schwarzenegger's ties with the tabloid press, published in Los Angeles magazine. The late dean of American journalism, Tom Wolfe gushed over Bardach’s second book on Cuba, “Without Fidel: A Death Foretold in Miami, Washington and Havana,” writing that “Without Fidel” is news between hardcovers by a relentless reporter who writes like a dream."

Bardach has had a long relationship with UCSB. She started teaching the first Global Journalism course at UCSB; served as a board member for UCSB's Carsey-Wolf Center for Film, Television and New Media; and was a Resident Scholar with the Orfalea Center for Global and International Studies at UCSB.

Collections like Bardach’s detail the methodology of investigatory journalism and shed a singular light on the exhaustive legwork and process of investigative reporting. Her papers and ephemera are a glimpse into the backstories that shape our understanding of politics, history and culture. They are a perfect example of how Special Research Collections can be a critical portal to understanding all sides of the story