The Coming of the Raj 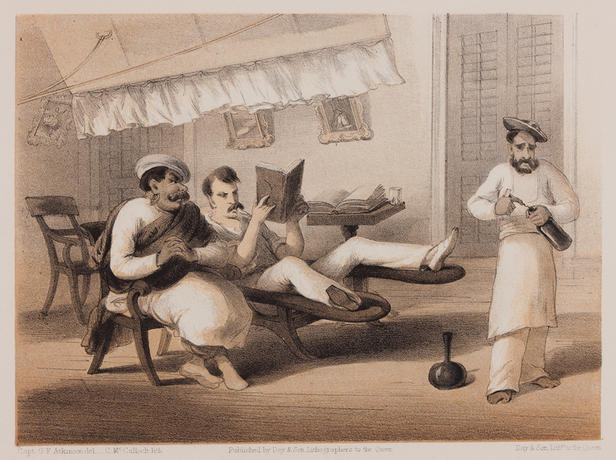 George Francklin Atkinson, Curry & Rice. London: Day & Son, 1860.
George Francklin Atkinson’s (1822-1859) Curry & Rice was a satirical work that critiqued the lives and behaviors of British colonialists in India. Atkinson served with the Bengal Engineers between 1840 and 1859. Written immediately following the Sepoy Rebellion of 1857, the work describes a fictional Indian village called Kabob. Included in the narrative are forty full-page tinted lithographs of daily life around the village, which he illustrated himself. Atkinson caricatured colonial officials in a humorous way, presenting brief vignettes of different fictional British characters residing in the village. He was inspired by Sir Charles Doyley’s depictions of Britishers in India, but he took a more critical approach to interpreting the relationships between the British and their colonial subjects. Native Indians were seen as treacherous and unchangeable following the Sepoy Rebellion; British colonialists distanced themselves from their subjects and exaggerated their social values in an effort to preserve their “Britishness” within the foreign space of India. The work enjoyed a long period of popularity among the British following Atkinson’s early death, in part because of the satirical nature of the work, but also because it presented a discerning view of colonial life in India.
Sara Miller McCune Collection

Illustrated London News, October 5, 1858.
The Illustrated London News (ILN) founded in 1842, was the world’s first illustrated newspaper. Published weekly, it combined illustrations and letterpress to produce a paper that greatly appealed to members of the British middle class. Illustrations of foreign countries and battles, such as the events in India, were often produced by observers and then sent to the paper to be redrawn by London illustrators.  The use of illustration remained quite popular until the 1890s when photographs completely replaced illustration.
This particular issue of the ILN features illustrations of the new East India Council. 1858 was a watershed year in the history of British India. The Sepoy Rebellion of 1857-8 revealed the ineffectiveness and corruption of the existing East India Company in addition to native unrest. In 1858 the British government stepped in and replaced the East India Company as the governing body in India. These ILN representations signal the shift in governance and the solidification of imperial power in the form of the British Raj.
Sara Miller McCune Collection

Sir Hebert B. Edwardes, A Year on the Punjab Frontier in 1848-1849. London: R. Bentley, 1851.
Major-General Sir Hebert B. Edwardes (1819-1868) was a prominent English officer, statesman, and administrator. He became famous as the "Hero of Multan" because he was actively responsible for the British victory during the Second Anglo-Sikh War (1848–49).
His two-volume work, A Year on the Punjab Frontier in 1848-1849 records his experiences during the war and serves as a general history of the Sikh province of Multan and the causes of the rebellion.
The Second Anglo-Sikh War is one of many examples of native insurgency during the mid-nineteenth century. These rebellions culminated in the Sepoy Rebellion of 1857, which Edwardes helped bring to a close by raising troops in Punjab. These various rebellions contributed to the perception of India as a turbulent colony, and one that required a greater force of power to administer and govern.
UCSB Library Collection (DS477.63 .E26 1851), Gift of Sara Miller McCune