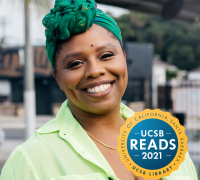 Please note that Arts & Lectures is UCSB Library's partner for this event and advance registration through their website is required. You will be required to create a free UCSB Arts & Lectures account. Register Here
You will be able to replay the talk for one week following the event.

UCSB Library is thrilled to present Patrisse Cullors, UCSB Reads 2021 author of When They Call You a Terrorist: A Black Lives Matter Memoir for a free online community talk.

This event will be followed by a Q&A moderated by Dr. Omise'eke Natasha Tinsley, UC Santa Barbara Professor of Black Studies.

Patrisse Cullors is a New York Times bestselling author, educator, artist and abolitionist from Los Angeles, CA. Co-founder of the Black Lives Matter Global Network Foundation, Patrisse has been on the frontlines of abolitionist organizing for 20 years. Since she began the Black Lives Matter movement in 2013, it has expanded into a global foundation supporting Black led movements in the US, UK, and Canada and has been nominated for the 2021 Nobel Peace Prize. The significance of the Black Lives Matter movement has been recognized by The New York Times as the "largest movement in US history." TIME 100 also named Patrisse as the 100 most influential people in 2020.

Patrisse has led multiple Los Angeles based organizations such as Dignity and Power Now, Justice LA and Reform LA Jails. Each of these organizations have won progressive ballot measures, fought against a $3.5 billion jail plan, and implemented the first ever Civilian Oversight Commission of the Los Angeles Sheriff's Department. Patrisse is also the Faculty Director of Arizona’s Prescott College, a new Social and Environmental Arts Practice MFA program, which she developed nesting a curriculum focused on the intersection of art, social justice and community organizing that is first of its kind in the nation. Not stopping there, Patrisse is also a former staff writer on Freeform’s Good Trouble series as well as an actress on the show. She also co-produced the 12-part YouTube Originals series titled RESIST, that premiered November 18, 2020 on the platform. In 2020, Patrisse signed an overall production deal with Warner Brothers, where she intends to continue to uplift Black stories, talent, and creators that will continue to transform the world of art and culture.