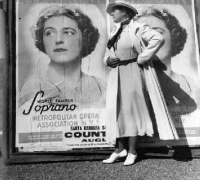 The life of a successful opera star is influenced not only by the roles an individual masters, but also by the contacts he or she makes within the profession. The initial steps toward success as a vocalist were not easy for Lotte Lehmann, but through perseverance, hard work and the variety of associations she was to make throughout her life, Lotte was able to create a very successful vocal career for herself. Through the presentation of selected photographs and other artifacts from the Lotte Lehmann Collection, this exhibit will provide some insight into these roles and relationships, both personal and professional, which were to have such a profound impact on the life of the great German-born soprano, Lotte Lehmann.

Lotte Lehmann was born Charlotte Sophie Pauline Lehmann on February 27, 1888 in Perleberg, Germany. In 1902, the Lehmanns moved to Berlin where Lotte enrolled in the Ulrich Lyceum, at which she was to obtain her first taste of acting. Upon graduation, Lotte was accepted at the Royal High School of Music. Dissatisfied after one year, Lotte auditioned and was accepted into the Elektra Gerster School of Singing. The methods of this institution, however, did not suit her vocal instincts and after a particularly unpleasant experience attempting to sing the Countess’s second aria from The Marriage of Figaro, Lotte was dismissed from the school. Soon after, Lotte’s voice teacher at the Gerster School wrote Lotte a letter in which she stated:

I can only say that none of my pupils has ever been such a disappointment as you have, and this has given me many a dark hour. I believe that, if you want to and have to achieve something in the future, you should take up a practical career. . . . Frau Gerster requests me to tell you that your progress is not even that of a mediocre pupil. . . .

Lotte was devastated. She and her brother Fritz searched through newspaper want ads for work and her father enrolled her in a secretarial school. But Lotte had not given up on her dream and decided to make one last attempt by writing to Mathilde Mallinger, a teacher residing in Berlin who had been Wagner’s first Eva in Die Meistersinger and had been an opera star both in Berlin and Bayreuth. Lotte’s father became angry and told her that she was wasting the stamp. Why did she insist on believing that all those experts had been wrong?

But this is where Lotte's luck changed.

Not only did Mathilde Mallinger agree to teach her, but Lotte’s father managed to convince Baron Konrad zu Putlitz to pay for her lessons until she was able to obtain a professional appointment.

Lotte blossomed under Mallinger’s tutelage. In 1910 she signed her first contract with the Hamburg Opera. Within a few years Lotte had progressed from small roles as pages and bridesmaids to more substantial portrayals. In 1916 Lotte left Hamburg to join the Vienna Court Opera. There she was to meet Richard Strauss and a variety of other musical personages who would have a profound effect upon her life. As her career progressed, Lotte performed at many of the world's major opera houses, presented Lieder recitals and recorded many of the works in her repertoire.

After final concerts in 1951, Lotte retired to an active teaching career until her death in Santa Barbara, California on August 26, 1976.