Pussy Riot: Feminism and the Fight for Free Speech in Russia 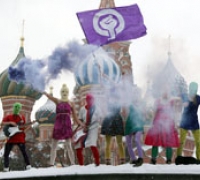 Pussy Riot: Feminism and the Fight for Free Speech in Russia

The new display in the Ethnic and Gender Studies Library (EGSL) on the 2nd floor focuses on the group "Pussy Riot," feminism, and protest in Russia.  Pussy Riot is best described as a Russian feminist punk rock protest collective.  The membership consists of approximately 11 women.  While performing members wear colorful “balaclavas,” or ski masks, to emphasize the anonymity of individual members.

Pussy Riot stages what have been described as “unauthorized provocative guerrilla performances” that promote feminism, LGBT rights, and their opposition to Russian President Vladimir Putin.  They gained international recognition when several members were arrested and sentenced to two years in prison.  They were declared "Prisoners of Conscience" by Amnesty International.