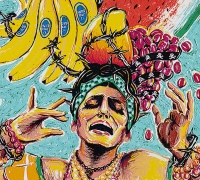 The UCSB Library is pleased to present an exhibition examining how people of Latin American descent create a sense of space and belonging in the U.S. through visual and musical expressions. The exhibition uses a hemispheric lens as it explores the dynamics of affirmation and celebration in music and visual art, as well as the struggles for collective identification and self-determination.

This exhibition reveals innovative and syncretic practices in music and visual art that connect Latinas and Latinos with Latin American musical forms and their African, indigenous, and European antecedents. In doing so, visitors will explore cultural expressions ranging from the tango of Astor Piazzolla to Lalo Guerrero’s “Chucos Suaves,” from “Manisero”, the song that sparked the rumba craze in the 1930s, to the East L.A. Latino punk scene; from Ester Hernandez’ silkscreen print about the iconic Lydia Mendoza to San Francisco Mission District poster aesthetics.

The exhibition addresses historical colonialism, capitalism, and globalism that provoked resistance to the exotification and commercialization of Latin American cultures in the U.S. It also examines encounters between tradition and modernity--be it in the 1917 recording of “Pelo telefone”, the storied first samba recording, or in the Plugz’s 1979 take on “La Bamba”--as it recognizes ways in which Latin American, Latina, and Latino artists fused dominant culture and counter narratives. Finally, it challenges visitors to think about Nuestras Américas that hemispheric communities have navigated into the 21st century.

*The terms "Latina and Latino" are used in the historical context since many artists and musicians identified themselves this way. It is recognized that use of the “x” in place of “a” or “o” is increasingly employed to acknowledge gender non-conforming identities.

All events are free and open to the public.

In recognition of the 50th anniversary of UCSB Black Studies and Chicana/o Studies.

UCSB Library is grateful for its many UCSB co-sponsors including Associate Vice Chancellor for Diversity, Equity, and Inclusion, Department of Black Studies, Department of Chicana and Chicano Studies, MultiCultural Center, and Office of the Executive Vice Chancellor.  In addition, the exhibition is supported in part by the Don Tosti Endowment for the Preservation of Mexican American Music History.