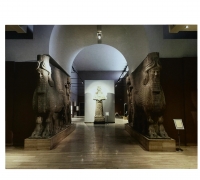 Thirteen photographs were selected for "Shadow and Light" to illuminate the spectrum of educators, scholars and artists lost to the violence prompted by the U.S. led invasion, occupation and resulting sectarian violence in Iraq. During their lifetimes, the men and women memorialized in this exhibit enriched diverse fields of knowledge —from history to calligraphy to the study of bees. Each assassination represented an attack on the underlying principle of education—to share knowledge—and served as a threat to scholars throughout Iraq that they were at risk. Estimates of the total number of Iraqi academics slain runs over 700. Some of their names remain unknown.

We invite you to view the exhibit currently featured by the UCSB Library, and join us to hear Beau Beausoleil, the project director, in conversation with Mona Damluji and Heather Hughes, co-curators of the UCSB exhibit of Shadow and Light. The event will be moderated by Rachel Winter, doctoral student in Art History at UCSB.