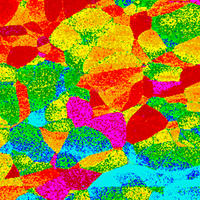 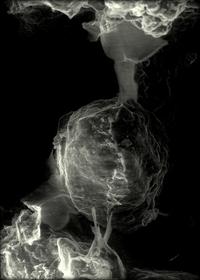 Designing Dirt
Nature’s best glue comes from bacteria. Strands of bacteria-derived xanthan (at bottom) glue together large aggregates of soil. By encouraging bacteria to secrete these glues, we are exploring soil-based solutions for making California agriculture more adaptable to drought and future climate change.
DetailsEnvironmental Scanning Electron Microscope (ESEM) image showing a 50-micron sliver of soil from UC Sedgwick Reserve amended with xanthan gum to improve soil health. Strands of xanthan gum can be seen at the bottom of the image gluing together much larger soil aggregates. Xanthan gum is a commercially available food additive produced by soil bacteria. Xanthan can potentially help California agriculture adapt to drought by acting as a sponge to increase soil water retention, acting as pipes to increase nutrient supply to crops, and acting as glue to decrease soil erosion. 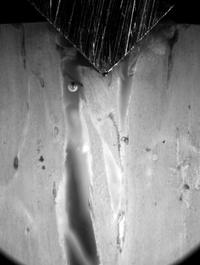 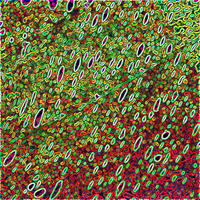 Lipid Domains 2: Invasion of the Lipid DomainsLipid domains in model myelin lipid bilayers obtained with fluorescence microscope. The image was post modified by ImageJ software (pseudo color, find edge). We found that the change in lipid domains may eventually lead to disintegration of myelin structure, which is the onset of multiple sclerosis.

Ocean Foam
This is an image of polymer diffusing randomly to fill the voids in the nanoimprinting lithography process. The hardened polymer creates interesting abstract textures like ocean foam gliding on the beach. This true-color image was naturally painted by interference of polarized light beams.
DetailsNanoimprinting is a technique for fabricating nanoscale structures. This beauty of randomly diffusing polymer occurred naturally just like any liquid flowing on surfaces. We got to see this snapshot because the heat treatments during the imprinting had hardened the polymer before it had time to completely fill the voids. The image might be beautiful, but it’s just another failed attempt at nanoimprinting.
The image was taken with differential interference contrast microscopy technique, which utilized orthogonally polarized light to enhance the contrast. The thickness gradient of the polymer naturally gave a beautiful color gradient across the image. 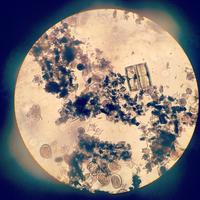 Phyto Moon
A drop of seawater may contain hundreds of diatoms and dinoflagellates. The photo was taken on a compound microscope, and filtered a little more brightly to give it the appearance of the moon. The heart-shaped organisms in this 10-microliter drop of water are abundant during Santa Barbara summers.
DetailsI have monitored harmful algal blooms in the Santa Barbara Channel for about seven years, and recently delved into approaching my research on a more synoptic level. I now collect samples in the channel and along the coast, and match these samples with fluorescence readings from remote sensors.
The photo was taken on an Olympus compound microscope with a small digital Nikon camera. I put a glass filter on the lens to capture a light effect that I was experimenting with in past samples. The image was captured through the optical piece of the compound microscope at high light, and set to 40x to view this sample. The content includes diatoms and dinoflagellates common in phytoplankton assemblages off the Santa Barbara coastline. 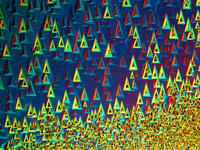 The Exodus
Hundreds of crystalline pyramids emerge from defects in the mother crystal.
DetailsOptical micrograph of the surface of a gallium nitride crystal taken with a Nomarski filter for contrast. 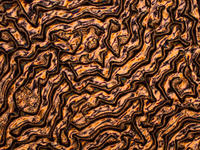 The Badlands
Perhaps best described as a beautiful failure, an early attempt to synthesize novel metal-coated polymer nanoparticles evokes the barren and mysterious landscape of the Dakota Badlands.
DetailsDigital micrograph (Olympus MX51) of a cast Polydimethylsiloxane substrate (polymer, thickness: 50 μm) coated with a chromium thin film (thickness: 40 nm) via electron beam deposition and supported on a silicon wafer. Ridges are the result of thin-film compressive buckling. 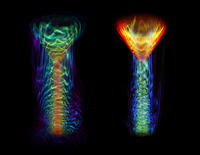 Supernova Explosion
A supernova explosion is one of the most powerful events in the known universe. This fascinating image is a spatial-temporal depiction of a computer-simulated supernova explosion from a recent research project.
DetailsIn this space-time diagram, a binary white dwarf merger with a 40,000-mile-wide rotating plasma disk around it evolves for about 100 seconds, and finally explodes as a supernova, with shock propagating outward at 10% of the speed of light, releasing 10^44 joules of nuclear energy. The peak density and temperature reach 10^9 g/cm^3 and 10^9 Kelvin prior to explosion.Density (left) and the magnitude of velocity (right) are visualized. The vertical axis represents time, and the horizontal plane represents space.
The image was rendered by a ray-casting algorithm in CUDA. The simulation was performed on a supercomputer.