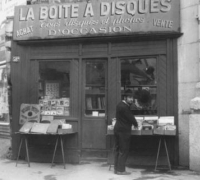 Edouard Pecourt was a Parisian record dealer and collector who owned La Boîte à Disques in Paris from the early 1950s until he emigrated, along with his collection, to the United States in 1986. Pecourt’s extraordinary collection of over 3,000 cylinders and 18,000 discs was acquired by the UCSB Library in 2010. The Library’s collection of cylinder recordings now numbers over 12,000 titles, and outside of the Bibliothèque nationale de France, it contains the largest collection of French cylinders in a public institution. Selections from the collection are on exhibit in the Department of Special Collections.