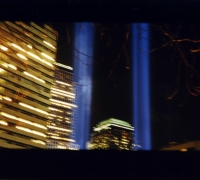 The 9/11 RENEWAL/REBIRTH exhibition project is conceptual artist RT Livingston's eyewitness account of the year following the tragic events of September 11, 2001 that jolted our nation into the new millennium.

Living just 9 blocks north of the World Trade Center, Livingston documented the sad and painstakingly slow renewal and rebirth of Lower Manhattan. Equipped with only a small Olympus Stylus Epic 35 mm point and shoot camera as well as a small 8 mm cassette Sony video camera, she wandered the streets of Lower Manhattan day and night often sneaking beyond guard posts or making friends with military personnel as she documented the surrounding area. The imagery, often gritty and sometimes out of focus, was quickly snapped to avoid having the film confiscated. Gradually, Lower Manhattan showed signs of renewal. Over the course of a year the World Trade Center’s mangled remains gave way to a newly engineered foundation.

9/11 RENEWAL / REBIRTH reminds us of our potential for rebuilding a bridge, even with extremism on the rise, to a safer more tolerant world.

The 9/11 RENEWAL/REBIRTH collection of photographs and video, captured from late September 2001 until the first anniversary of 9/11 on September 11, 2002, have been gifted to UCSB Library Special Research Collections.