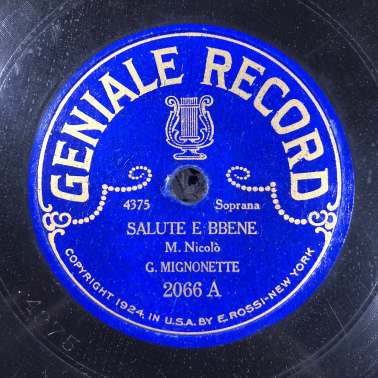 Gilda Mignonette (1890-1953) was a singer from Naples, Italy who was internationally famous in the early 20th century and had a noted singing career in both Italy and New York City. While not well known today, she was a prolific recording artist for Phonotype in Italy and later for Victor, Columbia, OKeh, Brunswick, and other record labels in the United States. She primarily sang and recorded Neapolitan song, making such songs as E l'emigrante chiagne ("And the emigrant cries") household staples and vocalizing the profound experiences of immigrant Americans.

While Neapolitan song was performed and popularized by such major operatic singers as Enrico Caruso and such popular performers as Carlo Buti, its importance inside the Italian-American community was substantial and the number of performers and size of repertoire was much larger than the output of these two men would indicate. Mignonette was one of the most highly regarded of the performers, but because popular recordings were more ephemeral than opera, the records were often not saved, and with some exceptions (such as Carlo Buti’s 1940s recordings) they are relatively scarce today.

The Giangrande collection of Italian and Italian-American popular recordings is currently being cataloged. Recordings that have been cataloged can be found in UCSB Library Search. Digital copies can be requested through a Special Collections Research Account.

For more information on the collection or assistance in using the materials, please contact Special Research Collections staff at special@library.ucsb.edu.