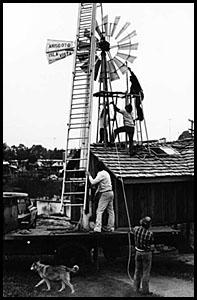 A number of collections of individuals and organizations contain material on Isla Vista and student issues. These include:

Buzzell (Rolfe G.) Collection (SBHC Mss 48). Mainly papers relating to the 1970 IV riots, Buzzell’s arrest, and subsequent legal action taken by Buzzell (Superior Court of the State of California for the County of Santa Barbara, No. 91214).

Center for the Study of Democratic Institutions Collection (Mss 18). A large collection from the Santa Barbara based think-tank, which includes numerous papers and discussions on Viet Nam, conflict, peace, the role of science and technology in American society, the political process, the environment, and student issues of the 1960s and 1970s.

Environmental Studies Collections. The 1969 Santa Barbara Oil Spill prompted widespread criticism of government responses to the crisis and spurred the growth of the environmental movement locally and nationwide. Also included are collections relating to other natural resource issues such as water usage.

Girvetz (Harry) Papers (UArch FacP 27). Isla Vista files kept by Girvetz, a UCSB Philosophy professor, as a member of the Committee of 50, and also including clippings and other ephemera.

Jacobs (Wilbur) Papers (UArch FacP 16). Files of a UCSB History professor, including material on the 1970 IV disturbances such as flyers, reports, issues of local newspapers, clippings, and other printed matter.

Ridland (John) Collection (SBHC Mss 47). Materials from a UCSB English professor, including newspaper accounts of the Isla Vista troubles, 1970; a manuscript of Ridland’s "Eyes and Ears on Isla Vista: An Unpublished Review from 1970"; and Isla Vista related printed items such as the Isla Vista Street Poets series, 1970-1971, from Water Table Press.