Art Through the Mail: The Eternal Network 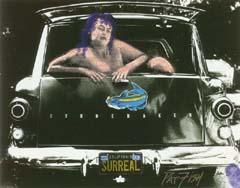 Correspondence Art, Arte Postale, Post-Kunst — however it’s named, it’s all Mail Art. As an art form, Mail Art puts hundreds of artists in contact with each other in a way that is direct, global, de-centralized and inexpensive. “Art Through the Mail: The Eternal Network” was the title of an exhibition currently on display at Special Collections in the Davidson Library, UC Santa Barbara in Winter 1997. Co-curated by Lyn Korenic, Lydia Emard, and Barbara Millett, this collection of Mail Art was generously donated to the Arts Library by Santa Barbara tattoo artist (and former mail artist) Pat Fish, who gave a talk at the Special Collections about the works on display on March 21, 1997.

During the 1970s and 1980s, Pat Fish actively participated in the mail art network. In a “Personal Narrative,” partially reproduced below, she tells part of the story of her involvement in the art form.

Over the years, my participation in this charming art form grew until I was receiving and sending a dozen pieces of international correspondence every day...Collaged postcards and original pen-and-ink drawings formed the majority of what I sent. Often composed in response to a request for participation in a collaborative event, the title or theme was enough impetus to inspire a contribution. Much of what constitutes this archive is the result of this sort of play, an entirely not-for-profit outpouring of spontaneous creativity worldwide.

One of the primary tenets of Mail Art is that everything submitted will be displayed. No juries, no returns, catalog to participants. The exhibitions I attended were rooms wallpapered with cards and objects that had been sent through the mail. Sometimes I would find my own submission installed near pieces by some of my correspondents from foreign countries, and I could write to them and describe the party, for in a sense, we had been there together.

Every show produced a catalog of the names and addresses of the participants, and reproduced as many of the submissions as they could afford to in the catalog. I was prolific, because I was responding to many requests for material, and often the invitations were sent to massive lists of all those who had contributed to other big shows. It grew into a very large pool of participants, always adding new ones with every show.

The first commandment of postal art is: Answer Your Mail. So it was with a certain sadness that I stopped sending submissions to shows. When I donated boxes of my archives to UCSB, it was so that students in the future will have the opportunity to study this glimpse into a non-competitive, non-profit, cooperative collaborative international art movement that transcended the limitations of the definitions of fine art. I believe that art is unnecessary beauty. It adds!

“Art Through the Mail: The Eternal Network” was on display in Special Collections in the Davidson Library in the Spring of 1997.