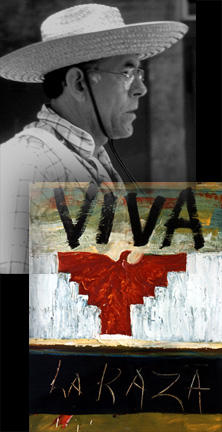 Salvador Roberto Torres is a Mexican-American artist whose primary media of art are painting and mural painting. He is an important and influential figure in the Chicano art movement, owing both to his art and to his civic work as a cultural activist. Torres has described his work as Chicano art that is "based upon the creative Chicano lifestyle, whose Mexican and American interrelationships and cultural influences form its ideologies and themes."

Torres was born in Texas but as a young child moved with his family to settle in the Logan Heights area of San Diego. He attended San Diego City College and then won a scholarship to the California College of Arts & Crafts in Oakland, where in 1964 he earned a B.A. educational degree in art. It was there he first met other Chicano artists who were exploring ways in which they could integrate their Mexican-American roots with their work as artists.

In 1973 he earned an M.A. degree in painting and drawing from San Diego State University, where he began to bring Chicano artists together to talk about cultural and artistic issues of their community. He has become known as an arts educator, teaching students at all levels and through televised classes. But he is best known as the "architect of the dream," for his crucial role in the creation of San Diego's Chicano Park, which includes the largest collection of Chicano murals in the world, and as a founder of the Centro Cultural de la Raza, also in San Diego. He became the center's first director and later helped form Las Toltecas en Aztlán, a Chicano artists group that was instrumental in eventually converting the Ford Building in Balboa Park into a museum and cultural center. Torres also has organized exhibitions and has founded and directed galleries.

It was during the period that Torres became involved in the creation of Chicano Park that he conceived of what he has called the Monumental Public Mural Project. In April 1970 local residents occupied the land underneath the Coronado Bridge in the Logan Heights neighborhood to protest a proposal that the land be used for a highway patrol parking lot. Torres proclaimed "Chicano artists and sculptors would turn the great columns of the bridge approach into things of beauty, reflecting Mexican-American culture." He sought inspiration and guidance for the endeavor by traveling to Mexico City to videotape the dedication of David Alfaro Siqueiros's mural at the Polyforum. Hearing Siqueiros speak about the history of his murals and about the Congress of Revolutionary Painters, of which he was a part, moved Torres to want to create a similar statement for the people of Logan Heights. In 1973 he began work on the project in the newly created Chicano Park. Inviting artists from San Diego, Los Angeles, and Tijuana, Mexico to participate, Torres turned his vision into reality as the giant pylons of Coronado Bridge were reclaimed for the community as immense works of mural art, replacing the graffiti-covered eyesores for which they had been known. He later assisted in producing an award-winning documentary film on the history of Chicano Park and the concept of the Monumental Public Mural Project.

Later projects have included the production of murals for an NBC television pilot, The Fortunate Son, and The Kelco Historical Community Mural, which Torres completed in 1993 with his former wife, artist Gloria Rebolledo Torres. Located in San Diego's Barrio Logan, the mural is an evocative historical account of the contributions of the people of Logan Heights and provides a glimpse of the future of the children of the community. Torres has stated that he chooses these types of creative experiences "to create and discover a new horizon in the history of art, a horizon inspired by the spiritual ideals and realities of La Raza and by other Chicana/Chicano and international artists who are striving to achieve social justice and freedom of self-expression on all artistic levels." His vision and his art have been described as "uplifting, lyrical, inventive, and often humorous."

As a painter Torres is best known for his compelling 1969 Viva La Raza, an oil on canvas that depicts the transformation of the eagle of the United Farm Workers of America into a rising phoenix. A former farm worker himself, Torres rendered the rallying cry "Viva la Raza" in bold, vivid strokes and slashes. These visual symbols became icons of the farm worker and the Chicano art movement. His work has been shown in a number of exhibitions, including Salvador Roberto Torres (1988), the nationally touring Chicano Art: Resistance and Affirmation (1990-93), and Made in California: 1900-2000 (2000).

From St. James Guide to Hispanic Artists, by Thomas Riggs (editor), ©The Gale Group, 2001. Reprinted by permission of the Gale Group.