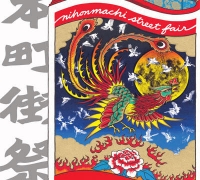 Poster art on exhibit
Leland Wong is a San Francisco-based graphic artist and photographer best known for his screen-print posters announcing the San Francisco Nihonmachi Street Fair. This is the 40th anniversary of the street fair, which takes place in Japantown each summer. The spirit of unity is an enduring value that brings the Bay Area’s diverse Asian American and Pacific Islander communities together in a celebration of both cultural affirmation and a commitment to community service.

Leland Wong’s artwork has been widely exhibited throughout the U.S. and Europe. His artistic affinities and iconography are deeply rooted in San Francisco’s Chinatown where he was born and raised. His posters, designed for community events such as the Nihonmachi, draw on both Japanese and Chinese traditions and are noted for their stylistic symmetry of pan-Asian aesthetics.

A good example in the exhibit is his announcement poster for the 25th Annual Nihonmachi Street Fair where a pair of dragon-headed turtles--powerful Chinese symbols of longevity and prosperity—appear impervious to the crests of waves washing over Japantown. The ubiquitous  thundering waves, appearing in many of his Nihonmachi posters, are reminiscent of Katsushika Hokusai’s Edo period wood cut prints