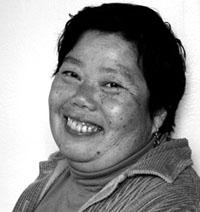 Shizue Seigel is a third-generation Japanese American writer and visual artist with a passion for retrieving and interpreting the overlooked and untold.

Her artwork examines the impact of culture, tradition, spirituality and internal and external oppressions on how people perceive themselves and each other. Her work has been exhibited locally, nationally and internationally at UCSB, JFK University, University of San Francisco, SOMArts, WomanMade Gallery, Manilatown Center and others venues.

She is the author of the nonfiction books In Good Conscience: Supporting Japanese Americans During the Internment and Century of Change. Her poetry and creative nonfiction have been published in numerous anthologies and journals, including Empty Shoes: Poems on the Hungry and the Homeless, My Words are Going to Linger: The Art of Personal History, Cheers to Muses: Contemporary Works by Asian American Women, and Invasion: Growing Up Asian and Female in America.

After some studio arts training in the late 1970s, she worked as an art director at major advertising agencies in San Francisco. In the mid-90s, her passion for social justice was rekindled by working on a HIV-prevention campaign for low-income African American women. She abandoned the corporate world to become a largely self-taught artist and writer inspired by a wealth of real-world experiences. Her family was incarcerated in American concentration camps during World War II. She earned her first dollar picking strawberries in a migrant labor camp. Her childhood shuttled from Occupied Japan to segregated Baltimore and skid row Stockton. As an adult, she experienced the Height in the ’60s, an Indian ashram in the 70s, the Financial District in the ’80s, and the needle exchange in the ’90s, and civil liberties education post 9/11.

She served as editor/art director of Nikkei Heritage, the quarterly magazine of the National Japanese American Historical Society, and as English editor of The Beam, a free monthly magazine for Bay Area Nikkei.

She continues to utilize word, paint, photography, computer graphics and the global Flicker community to comment on the rich collision of class and culture in today’s evolving world. She and her partner, Ben Pease, were cartographers for Rebecca Solnit’s Infinite City: A San Francisco Atlas, and worked with the University of Wyoming on an atlas of Laramie. (This bio is from Shizue Seigel's homepage at http://shizueseigel.com/AboutBio.htm)