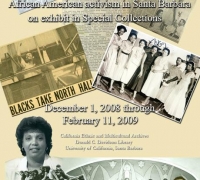 This year’s winter exhibit focuses on the African American leaders of Santa Barbara and their legacy of activism for civic improvement, equity, and social justice. Their many decades of selfless dedication contributed to the betterment of Santa Barbara, lifting the quality of life for many of our citizens.

These were unsung heroes who were instrumental in the founding of many institutions and programs that continue to meet real needs. Among these are the Goleta Valley Cottage Hospital, the Franklin Neighborhood Center, the Food Bank of Santa Barbara, and the UCSB Community Affairs Board.

In the 1920s African American leaders were already organizing and meeting with civic activist Pearl Chase. In the 1940s the George Washington Carver Club had a history of addressing educational inequities and raising scholarship support to send African American youth to college. The NAACP’s local chapter had already been organized and supporting both local and national social justice issues.

By the 1950s Dr. Horace McMillan was exposing racially discriminatory practices in housing and employment and was instrumental in desegregating our local hospitals. In the early 1960s the NAACP won legal judgments that reversed discriminatory hiring practices among local banks. Also in the early 1960s, journalist Bill Downey, upon his arrival here wrote an incisive series in the Santa Barbara News Press on the inequities towards our Black citizens.

There is a long history of social service providers with such leaders as Herman and Valencia Nelson, William Simms, and Anita Mackey. Herman and Valencia Nelson, for example, responded to the needs of hungry citizens, taking it on themselves to distribute food to needy Eastside residents, renting a truck to pick up government surplus food in Oxnard, starting a program that would later become the Food Bank of Santa Barbara. Women leaders left their civic imprint on Santa Barbara, including Willie Rowan, Shirley Kennedy and Anita Mackey, who lent much needed wisdom and inspiring leadership to the boards of many civic organizations.

In the ensuing decades African American leaders emerged from our community to lead important civic organizations such as the George Washington Carver Club, the Jack and Jill Clubs of America, The National Association for the Advancement of Colored People Santa Barbara Chapter, and the Martin Luther King Committee.

The exhibit pays tribute to the predominantly African American churches that sustained our local African American population, providing spiritual guidance, an enduring sense of community, and a safe haven from the racial injustices that swirled throughout the community in housing, employment, and in education. Many of the leaders of the civic organizations were also leaders in these churches.

The exhibit includes historical photographs, letters, documents, and ephemera from throughout Special Collections. Past presidents of the NAACP Santa Barbara Chapter and others donated additional materials. Exhibit selections are being outreached to community centers through the use of digitized facsimiles and interpretive texts, culminating with a community workshop on archival preservation, planned for February, to commemorate Black History Month. In this way the exhibit brings to the fore the legacy of these great leaders amidst the continuing movement for equity and social justice.