Guide to the Roberto Eyzaguirre Collection 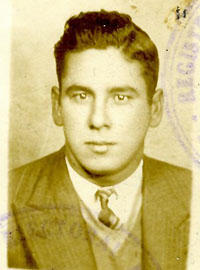 Roberto Nicolas Eyzaguirre Barron was born in the Barrios Altos district of Lima, Peru on March 22, 1919.  He first worked for Standard Oil in 1937, leaving years later to start a transportation business. He retired in the early 1980s and moved to the United States in order to be closer to his daughter. He died on September 19, 2004 at the age of 85.

As a teenager, he would often go to the cinema to see the latest films of tango singer Carlos Gardel. At home he would listen to Peruvian tango singer Jose Cómena on Radio Nacional. When he immigrated to the United States, he brought with him his record collection, part of which is now housed at UCSB Special Collections.

The Roberto Eyzaguirre Collection continues to be built upon by his grandson, Brandon McGrath. It contains more than 2,000 78 rpm records recorded in the early part of the 20th century by companies such as Brunswick, Victor, Odeon, Columbia and Atlantic. The bulk of the records are Argentinian and Peruvian with some other Latin American genres.