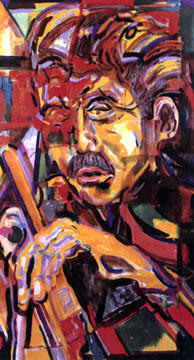 Palomino attended Fresno's Edison High School where he received artistic encouragement from art teacher Elizabeth Daniels Baldwin. Ms. Baldwin was instrumental in getting Palomino's book In Black and White: Evolution of an Artist published in 1956. This book reproduces much of Palomino's work done between 1945 and 1955 while he was a youth. After graduation from high school, Palomino served two years in the Marine Corps. He then attended the San Francisco Art Institute in 1954, the Fresno City College in 1956, and Fresno State College in 1957. He also attended San Francisco State College from 1960 to 1965, earning a BA and MA in Fine Arts

Palomino characterized his work during the years 1957-1965 as gabacho (Anglo) art, referring to the found objects and junk materials incorporated into his sculptures of this period. A number of these sculptural pieces were included in his autobiographical, animated film "My Trip in a '52 Ford." This film, created for his Master of Arts thesis project presented at San Francisco State College in 1966, features his assemblage sculpture as cinematic characters. Included are Mary '52 Ford, "an immortal mother having children after death," George Go, Dorothy Dresser, Carol Chair, and Steve Stove. From 1968 to 1969, Palomino worked in Denver for the Migrant Council, became a member of La Raza Unida party, and then returned to Fresno to begin his teaching career.

An expression of this new Chicano culture was the development of numerous artists' groups working with and for the people of La Raza. Palomino's involvement with activism in the arts includes serving as an artistic director for several school and community programs in the central valley of California. He worked with the Retired Teachers Organization, the Fresno Juvenile Hall, and Fresno City High Schools to create murals at a school, a hospital, and various public places. Palomino was a participant in the 1973 National Symposium on Mexican American Art at Trinity University. In 1973 Palomino became artistic director for "Inner City Mural Project" of Fresno and, through a 1973 National Endowment for the Humanities grant, assisted the creation of the Malaga Community Park mural titled Humanities Mural. His artistic and community activism gained additional support in 1974 with a second National Endowment for the Arts grant, followed by a California Arts Council grant in 1976.