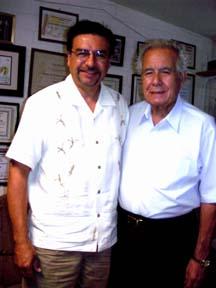 Guide to the Miguel Méndez Papers

Miguel Méndez is one of the leading writers in the field of Chicano literature. His work includes novels, short stories, essays and poetry. In his review of From Labor to Letters: A Novel Autobiography – Miguel Méndez (1997) Marco Portales describes him as the famous Yaqui-Chicano author, one of the few writers in this genre who like Tomas Rivera choose to write almost exclusively in Spanish, “continuing to spin out stories that he has published for many years wherever he has elicited interest, becoming in the process one of the first Mexican-American authors who has amply peopled Chicano literature with the stuff of his own existence and with characters, situations and stories he has imagined and experienced.” Miguel Méndez has written over 57 literary works over the span of his career, writing his first novel at the age of 18.

Miguel Mendez writes in Spanish, and often about the U.S. - Mexico border area. The Chicano Literature: A Reference Guide describes him as “one of the principal voices of socially committed Chicano fiction.” The Dictionary of Literary Biography’s Chicano Writers First Series (DLB) says of him “Chicano literature has in Miguel Méndez M. one of its finest and most sensitive writers.”  The DLB goes on to say that in 1969 his two short stories “Tata Casehua” and “Taller de Imagenes” published in the seminal Chicano literature anthology El Espejo/The Mirror, “written in poetic prose by a brick layer with only a sixth grade education, left a profound impression on readers and critics.”

Retired as a full professor at the University of Arizona, he describes himself as a self-taught man who learned much of what he knows by spending long hours at the public library.  His mastery of language, he says, “was the fruit of long hours writing in solitude by candlelight.” He says his mother taught him to read, having been raised in poverty and lacking any formal education beyond the 6th grade. He spent much of his life as a laborer, brick-layer and farm worker and worked in construction until 1970 when he was offered a job teaching Hispanic literature at Arizona’s Pima College after applying for the position and passing the exam with flying colors. In 1984 the University of Arizona conferred on him the honorary Doctor of Humane Letters.  In 1991 he was awarded the “Premio Nacional de Literatura Mexicana Jose Fuentes Mares.” Says Gary Keller of Bilingual Press/Editorial Bilingue, “We are committed to Miguel Méndez, whose work is sure to continue to be a lasting component of the Chicano canon.”

Miguel Méndez’ papers were established in CEMA in 2004. They include personal papers documenting the writer’s life and literary career, original literary manuscripts and essays, correspondence files, photographs, an unpublished novel, ephemera, audio-tapes, and files related to the literary magazine he directed at Pima College. Their volume amounts to about 12 linear feet.