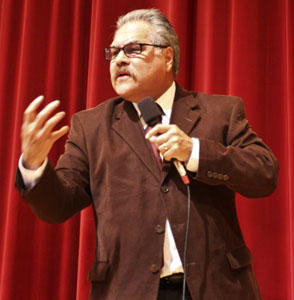 The Teatro Campesino Archives represents over twenty years of this theater company's activities, the country’s newsest influential Latino theater group and one which has made major contributions to Chicano culture in the United States and to the development and expansion of the boundaries of theater everywhere.

El Teatro Campesino began with short performances in the fields of California's central valley for audiences of  farmworkers in 1965. By 1970 the Teatro had gained an international reputation and had inspired the formation of many other Chicano theater companies. The transformation started in a context of a new awareness of cultural identities in the 1960s which brought a new consciousness of their social, political, and economic positions to minorities. This context provided one of the resources which contributed to El Teatro's growth: audiences who were ready for the clarity which its dramatic art brought to their situation.  The performances drew on traditions from European drama such as commedia dell'arte, Spanish religious dramas adapted for teaching Mission Indians, a Mexican tradition of performances in California which began in the mid-ninteenth century, and Aztec and Maya sacred ritual dramas.  The name given to traveling groups of Aztec actors, tlaquetzque, "those who made things stand out,"seems particularly apt for the performances of El Teatro Campesino.

The events of the times were made to stand out beginning in 1965 by Luis Valdez, a Chicano who was one of ten children of farmworkers who followed the crops  for a living. Luis Valdez worked in the fields with his family from the age of six, and attended schools in the San Joaquin Valley. An early interest in drama was expressed in the puppet shows he gave for neighbors and friends. He finished high school and went to San Jose State College, where he received a B.A. in 1964 in math and English.  The drama department of San Jose State University produced his first full-length play.  He worked with the San Francisco Mime Troupe for several months, then went to his birthplace, Delano, where he joined Cesar Chavez, leader of the striking United Farmworkers of America, and formed El Teatro Campesino.   Valdez's influence on the theater world includes teaching drama at Fresno State College from 1968 to 1970 and at the University of California at Berkeley and Santa Cruz from 1971 to 1974.  He has continued heading workshops at the Teatro's San Juan Bautista headquarters.  Valdez was appointed to advisory boards of the International Theater Institute in New York and PBS's Visions Project at KCET in Los Angeles.  He has served on the theater panel for the National Endowment for the Arts and in other theater advisory capacities. Throughout its history, from the early days of performing on flatbed trucks to the fully developed professional production of "Zoot Suit" on Broadway, Valdez has been the inspiration and guide for the collective efforts of the Teatro. 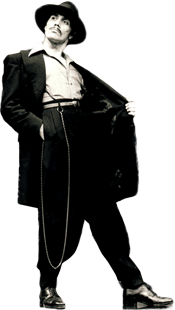 In the early years, all of the actors were farm workers.  Valdez emphasized ensemble work, in which all actors contributed to the interpretation of the performance. Most troupe members took on multiple roles.  One person, for example was an actor, technical director, company manager, and tour coordinator; another was an actor, business manager, administrative director, researcher, and producer.  Members of the Teatro created their own material.  They started with no scenery, no scripts, and no costumes. They used props and costumes casually, and hung signs around their necks to indicate characters.  Working with their own material, the actors were free to express what they knew and felt. "Real theater lies in the excited laughter (or silence) of recognition in the audience, not in all the paraphernalia on the stage," said Valdez.  The dramas were short, but Valdez decided to call them actosrather than skits, because skits seemed too light a word to express the work they were doing.  In 1967 Valdez explained that El Teatro's purpose was to examine and redefine the heart of the Chicano people: ritual, music, beauty, and spiritual sensitivity.  He sees theater as a vehicle "to affect and modify and change and give direction to society. . .  You can take people's minds off their problems by entertaining them, but you can also do that by giving them a different perspective," said Valdez in a later interview.  "One of my approaches to life in general [is] if you feel you're short-changed, fill the gap yourself.  Why mope?  Why feel angry?  You've got the power to do something."

Humor has always been an important ingredient in the Teatro's drama, inspired by Mexican folk humor which is typified by the performances of the Mexican comedian Cantinflas.  Valdez explains that the troupe was not concerned with being witty, but only with the truth of the moment, and humor was found in raw truth.  Social points were made not in spite of comedy, but through it, using broad farcical statements.  Humor became a major asset and weapon, adding understanding and appeal to the messages of the actos.

Chicanos who saw the popular success of El Teatro Campesino in the seventies felt that it had  brought Chicano philosophy not only to new audiences, but to the artistic heart of the system.  "I want audiences to get up off their seats and go out of the theater feeling somewhat better about life. . . I want them to sense human unity rather than divisiveness," said Valdez after "Zoot Suit" opened on Broadway.

The following timeline presents some of the highlights of El Teatro Campesino reflecting the history of the organization up to the date that the archives were established.

1965- Valdez founded El Teatro Campesino, which was the cultural and propagandistic arm of the United Farm Workers of America for two years. El Teatro went on its first national tour to raise funds for the striking farm workers.

1969- The Teatro participated in a world theater festival in France, moved its headquarters to Fresno, produced the film "I am Joaquin," which won several awards, and created El Teatro Nacional de Aztlan (TENAZ), a national network of Chicano theater groups:

1969 to '80- The Teatro toured across the United States and Mexico and made six tours to Europe.

1971- El Teatro Campesino moved its headquarters  to San Juan Bautista.  Traditional religious plays, "La Virgen del Tepeyac" and "La Pastorela" were adapted for Christmas celebrations at the center. Valdez was appointed to the advisory boards of the International Theater Institute in New York and to PBS Visions project in Los Angeles. Valdez taught drama at the University of California in Berkeley and Santa Cruz from 1971  to1974.

1976- The U.S. State Department, as part of its Bicentennial programming, designated the European tour of "La Carpa" as an official event.  "La Carpa" was also filmed for PBS under the title "El Corrido."

1977- The Teatro company appeared in the film "Which Way Is Up?"and Valdez collaborated on the screenplay.  "La Pastorela" became a play for actors.

1978- "Zoot Suit," written and directed by Valdez, was presented at the Aquarius Theater, Los Angeles, and went to Broadway for four weeks in 1979.

1981- The Teatro opened its playhouse, converted from a fruit-packing shed in San Juan Bautista, and presented Valdez's adaptation of David Belasco's "The Rose of the Rancho," and Valdez's play, "Bandido," based on a figure in California history.
1982-"Corridos," a new form using mime, music, and theater to explore the lives of the campesino, was produced at the playhouse .

1986- "I Don't Have to Show You No Stinking Badges," a play by Valdez, premiered at the Los Angeles Theater Center and played for four months.

1987- Valdez directed the film "La Bamba."  In San Juan Bautista the members continued the work of the Teatro as a professional company and a cultural institution.  It reached out to new American audiences while preserving an ancient tradition of popular classics and introducing new original work by Latinos and Latinas.