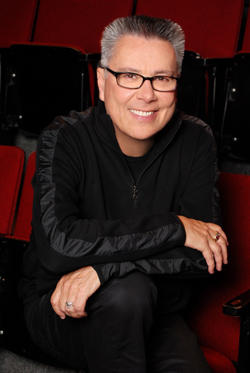 Dan Guerrero began his multi-faceted career in New York where he moved from East Los Angeles at age twenty to pursue studies in musical theater. He performed off-Broadway, in regional theatre, summer stock and in musical revues at Manhattan's most fabled cabarets including the Bon Soir in Greenwich Village.

He later became a successful theatrical agent with clients in the original casts of countless Broadway musicals in the years from A Chorus Line to Cats, representing Tony Award winners and future Hollywood stars. He returned home to Los Angeles for an equally successful time as a casting director for stage and television before turning his talents to producing and directing.

Live concert events include multiple productions at the Kennedy Center; Arabesque: Arts of the Arab World in the Opera House; the AmericArtes Gala in the Concert Hall; Pablo Neruda: A Centenary Celebration in the Terrace Theatre; and Japan! Culture + Hyper Culture in the Rooftop Gallery.

Guerrero also produced Lalo Guerrero: The Original Chicano, an award-winning documentary on his late father, Chicano music legend Lalo Guerrero. The film aired nationally on PBS stations in the Voces series hosted by Edward James Olmos and included a DVD/CD release. It continues to screen at national and international Film Festivals including the Turks and Caicos International Film Festival where the film garnered awards for Best Documentary, Best Director, and Best Song. The Spanish-language subtitled version has screened in Latin America in a nine-week run at Cineteca Nacional Mexico in Mexico City.

At the same time, Guerrero has crossed the country with his critically acclaimed solo show ¡Gaytino! following the 2006 world premiere run in Los Angeles produced by the Center Theatre Group. He has performed the autobiographical play with music at commercial venues that include the Kennedy Center in Washington, DC, New York's Zipper Theatre, the Los Angeles County Museum of Art and the historic Lensic Theatre in Santa Fe where his performance was introduced by Governor Bill Richardson. ¡Gaytino! is also a favorite on the university circuit, playing on campuses from Northwestern to North Dakota State, the University of Maryland, UC Santa Barbara, and UCLA.

Guerrero is an influential activist, speaking out in print, television and radio interviews in English and Spanish on both Latino/Chicano and LGBTQ issues. He is a popular figure on the speaking circuit and has addressed groups and organizations including the National Council of La Raza in Washington, DC, the Southern Arizona LULAC Youth Leadership Conference in Tucson, the California Teachers Association Conference in Palm Springs and the National Education Association conference in Washington, DC among many others.

His most recent presentation, Activism and the Arts: A Life Journey has been hailed for its portrayal of the interconnected lives of artists and activists who fueled the civil rights struggles of the past several decades. The talk has been presented at the University of CA Santa Barbara, University of CA Los Angeles, University of Texas, Austin, the Herberger Theater Center in Phoenix, and a LULAC conference in Dallas. The Smithsonian Latino Center and the Human Rights Campaign recently brought it to the National Museum of the American Indian in Washington, DC.

He has been recognized for his activism and career achievements by the California State Senate, the U.S. House of Representatives, the National Gay and Lesbian Task Force, the National Council of La Raza, the California Legislature and the County of Los Angeles Board of Supervisors. Industry honors include an Imagen Award, an Honorary Local Emmy Award, and an Alma Award nomination. The LA City Council also declared Dan Guerrero Day in the city of Los Angeles for his contributions to the city and he was recently honored at the Los Angeles Times Latinos de Hoy Awards at the Dolby Theater with the inaugural LGBT Ambassador Award.

Guerrero is a Distinguished Community Scholar at UCLA's Cesar E Chavez's Chicana/o Studies Department where he created a course based on his solo show ¡Gaytino! Performance and the Power of One. The latter led to his appointment as a Regents' Lecturer jointly in the UCLA Cesar E. Chavez Department of Chicana/o Studies and the LGBT Departments.

The Dan Guerrero Collection on Latino Entertainment and the Arts was established at the California Ethnic and Multicultural Archives in 2002 and continues to grow periodically.