Guide to the Sean Carrillo Papers 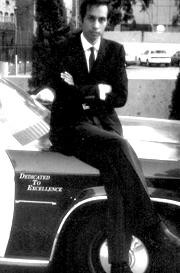 As a teenager, Sean completed a self-directed photography course at All Nations Neighborhood Center in Los Angeles and later at the behest of Director Bill Maxwell he became a member of the board of directors as Community and Youth Representative.

He attended Los Angeles City College and California State University at Los Angeles where he worked as the Events Administrator for the Exploratorium Art Gallery. At Cal-State in 1980, Sean met visual artists Harry Gamboa Jr. and Gronk. He joined their performance art group, ASCO, and toured with them throughout the Southwest for several years as a performer, artist and Technical Director.

In 1984 Sean met Bibbe Hansen, daughter of the late Fluxus artist Al Hansen. They married and he became stepfather of two boys, Channing and Beck. Shortly thereafter they adopted a daughter, Rain. In 1986 began he began work as an assistant editor for Steven Eckelberry who was editing a film for director Paul Williams.

He worked for several years as an assistant and then graduated to editor. During this period he edited a film on Global Warming for the esteemed documentary director, Harrison Engel and the legendary educational film company Churchill Films.

In 1990 Sean and Bibbe opened Troy Café in downtown Los Angeles which quickly became nationally renowned for showcasing the best in multi-cultural music, art and performance, with a special emphasis on the Latino Arts Community. Troy Café was nationally recognized as a premier venue for emerging artists.

From 1995 - 2004 Sean Carrillo has worked as a producer, director, editor and writer of industrial videos, commercials and live events. Notably, he produced the in-flight commercial for Hawai‘i Pacific University currently in rotation on United Airlines.
In January 2005 he and his wife relocated to the East Coast of the United States. Most recently Sean co-produced a video to commemorate the 35th Anniversary of Natural Resources Defense Council (NRDC) which was screened at their Anniversary Gala, at the Waldorf-Astoria Hotel in New York City.