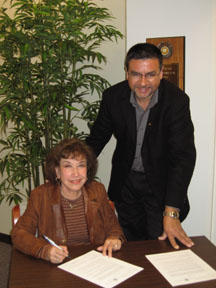 This is a small but important Chicano literary collection that documents the donor’s close relationship to renowned Chicano writers over three decades. The collection adds a greater understanding of the evolution of Chicano letters and its increasing prominence in Chicano literature internationally.

The main subjects of the collection are writers Rolando Hinojosa, Tomás Rivera (former Chancellor UC Riverside), and Sabine Ulibarri; all three writers are very significant figures in the Chicano literary canon. In addition to the correspondence the collection includes photographs, historical documents, related ephemera, and books.